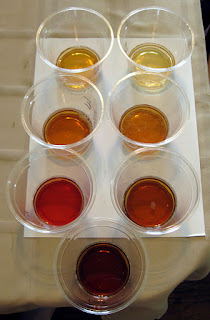 With three of my beer nerd friends (Alex, Dyan, and Matt) having their first children in 2011, it seemed like a good excuse to trick them into bottling some beer for me. I respect all of their palates so I invited them over (along with my friends Nathan and Peter) to help blend and bottle a selection of sour beers I’d been aging for between 9 and 18 months. Sadly Dyan’s child had been born only a week earlier and Matt was busy (apparently children these days are no longer capable of raising themselves), but we decided to go forward with the plan anyway and just give those two a few bottles.

Blending is one of the only aspects of brewing that is an art (as opposed to a craft or janitorial work). Being able to taste a variety of beers and mix them together to get something greater than the individual components is difficult and takes practice, especially since bottle conditioning will alter the flavor of the beer. Most of my experience with blending is from combining commercial beers or homebrews in the glass. This was the first time that I had enough beers ready at the same time to conduct a legitimate blending session. 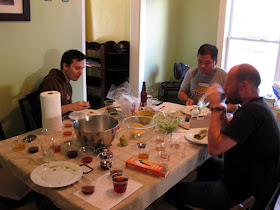 There were seven beers available: Berliner Lambic (5% brightly acidic Berliner weisse), Fruit Salad (a blend itself of a Golden Sour on soursop and the Quick Oud Bruin on raspberries and black raspberries), Dark Saison III (with buckwheat honey, figs, and fall spices), Apple Brandy Golden Solera (sharply acidic, and pretty oaky), Buckwheat Amber (young and fairly restrained), Irma (the amber saison Nathan and I brewed at McKenzie Brew House last fall... the "Extra" barrel aged version of which is running a 4.3 on BA), and Capitol City ESB on Brett (the last of a keg I won, which I pitched Brett Brett B into a few months ago).

After tasting and discussing each of the beer on its own we began playing with different combinations, taking notes, and passing around our favorites. After the initial round of tasting no one liked the Fruit Salad (the soursop gives it a weird Parmesan flavor), or the Cap City (too young and hoppy still) enough to include them so I put those carboys back for further aging. When we started to get close to our targets for the actual blends we measured the ratios by making 100 g samples on a scale. It was easy to figure out the percentages and a reasonable sample size to get a real taste of the beer. We took 50 g of each blend and poured it into a separate cup, that way after taking a sip there was still a reserved amount that could be adjusted from a known starting point. Below are the blends each of us settled on: 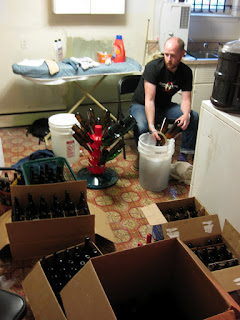 With all the blends determined, Peter checked the math to ensure that we'd have enough of all of the beers to bottle two gallons of each blend and still have at least two gallons leftover of each beer to bottle straight (luckily we did).

Before we started bottling I distributed one packet of rehydrated champagne yeast between the carboys (to avoid having to add yeast to each of the eight buckets to come). Ideally we would have had a scale with a large enough capacity to use weigh to dial in the blends, but I didn't so we used the marks on the side of the bottling bucket as a guide to measure by volume. All of these beers were similarly dry, so we did not bother to factor in an adjustment for the switch from weight to volume. When blending like this an auto-siphon is a must, but hold the end of the tubing above the beer until the air is cleared from the line and the next beer starts to flow (otherwise you’ll be oxidizing the beer as the air bubbles in the line out). 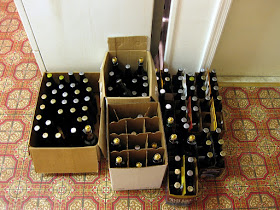 Before priming the blender tasted the scaled up combination to see if any adjustments were needed, in Peter's case the beer was not as bright as he wanted so we a quart of additional Berliner Lambic. To prime the blends I boiled 5.5 oz of table sugar in 1 pint of water, adding 1/2 cup for each two gallon. For the plain batches I made individual priming solutions tailored to their specific flavor/volume. One gallon of Peter's blend and one gallon of the straight Buckwheat Amber each went onto one pound of sour cherries. I had considered dry hopping some of the beers as well, but did not notice one that called for it. Lots of tasting to come in a couple months.

One of the keys to blending is to have beers with a variety of characters. In this case we had a huge range since the beers were all brewed with different recipes, microbes, and with or without spices, oaks etc... but this is not the only way. If you are looking to make a more focused blend you can use the same recipe with different microbes (like the collaborative Isabelle Proximus), methods (as the Bruery does with Oude Tart – fermenting some spontaneously in the barrels for more sourness), or ages (as Lambic brewers do). Some brewers also keep a pale colored "acid beer" on hand that is used to lighten the color/flavor and add acidity without contributing much of its own flavor (with a pH of 3.1, that role was filled by the Berliner Lambic in our case).

It ended up being a successful Saturday afternoon. I got bottles, bottling assistance, and a variety of blends while everyone else got some free beer (half of their blend, and bottles of all the other blends and single batch bottlings). Hopefully with so many carboys now empty I’ll finally be able to start brewing for the Great Souring Experiment (which would lend itself perfectly to another session like this once all of the batches are ready).