Right up there with the absurdity of my Cable Car clone is this wine barrel aged Belgian single, which was Based on Russian River first batch of Beatification. 001/PH1 was only released once, aged in two barrels they got second hand from New Belgium's La Folie program (when they were stepping up to massive oak foeders). The base beer was Redemption, Russian River's Belgian single. To be clear that beer had nothing in common with all subsequent batches of Beatification, which are sour mashed and spontaneously fermented.

The recipe we used was straight from Vinnie (hard to imagine a combination of a better brewer and more generous guy). We aged it for 20 months in a second use French oak red wine barrel that we had previously aged a sour red ale. The microbes inhabiting the wood were from Wyeast Roeselare Blend, and the dregs of Lost Abbey's Red Poppy that I cultured up (but who knows what is still alive in the wood). We should have gotten some La Folie dregs in there (before they switched to the flash pasteurized bombers), but sadly the plan to brew this beer formed after that first beer was already souring.

It was also an appropriate day to do this tasting because earlier this afternoon I was talking about sour beer with Lauren Salazar (who is in charge of blending La Folie) for an article I am writing about bending beers for BYO. It was funny hearing her contrast the way they brew sour beers compared to the "Russian River way." Russian River brews a different base beer for each of their releases, nearly sanitizes their barrels before filling, stagger pitches controlled amounts of various microbes, and then blends and bottles the batch essentially as a group. New Belgium on the other hand brews only two base beers (a dark and a pale), using them to refill the partially emptied foeders when the beer is ready to blend and bottle, and uses beer from their favorite barrels to inoculate new ones. If there is one thing I am learning from interviewing the Americans who know sour beer production best, it is that there is no one best way to accomplish any task. 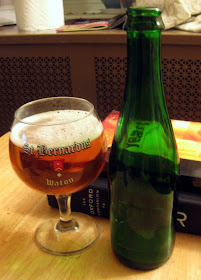 Appearance – Brilliantly clear gold with a glowing orange-rust core. The thin white head recedes pretty quickly, but retains a ring around the center. Sometimes the color of a beer is just right, this is one of those.

Smell – Bready yeast, fermented pears, hint of vinegar (no nail-polish remover luckily), oaky coconut, not especially funky. It shares many aromatic traits with the sour red that was in the barrel first, but the oak and wine are subtler despite the longer aging period.

Taste – Bright lactic acidity, subtle red berry, wine, and a touch of basement mustiness. The flavor is mostly soft, but the finish just has a slight sharp acetic edge to it (I'm usually not a vinegar fan, but this is just the right level). Not as dry as a lambic, there is still a hint of residual malt sweetness. It still has a touch of cereal character in the finish that I taste in most of my pale sours (should fade with another month or two).

Mouthfeel – Carbonation could be a stronger, I'd call it medium at the moment. The body is lusher than I expected, enough to support the heavy acidity.

Drinkability & Notes – It took longer than we expected to sour, but it was worth the wait. The blend of fruit, wine, and sourness is just about perfect.

The problem with comparing this to the original Beatification is that I only got to try one bottle of PH1... and that was five years ago (almost to the day). I went back and read the review I posted on BeerAdvocate after doing this tasting for comparison: I don't get the perfume/lavender I tasted in the original, but the overall balance and general flavors are remarkably similar. Hopefully a bit more complexity and carbonation will come with more time in the bottle.
The Mad Fermentationist (Mike) at 9:18 PM