With the cold weather arriving in DC early (I already saw my first snow of the year a couple days ago in Williamsport PA) I thought it was time to dip into my stash of big beers for this review. Six months ago I brewed a clone of Hair of the Dog Adam, a terrific, but uncategorizable dark ale with a kick of peat smoked malt. For more details on the recipe and beer check out my initial post on the brew.

The carbonation still hasn't shown up in this one, but it has enough residual sweetness and body to still be tasty. That is something my liquor spiked barleywine (which finished a few points lower) was not able to handle (incidentally the carbonation is finally coming along on that one). 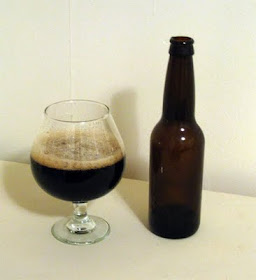 Appearance – Dark, dark, dark brown... ok black. Clear when held at a steep enough angle to gaze through the otherwise opaque body. Thin, coarse, tan head. Despite the lack of carbonation it has decent head retention.

Smell – A combination of coffee and earthy peat malt take the lead. The smoked character is very well integrated into the rich caramel malt. Certainly some alcohol, but I wouldn't call it hot. Nice dark fruit character as well, prunes in particular.

Taste – Well balanced, thick maltiness balanced by bitterness from both the hops and the dark malt/smoke. The smoke and coffee/chocolate/biscuit malt notes blend perfectly. The hops are not as potent as the 65 IBUs might suggest, but that may be a result of the clean Galena and Super Styrians used for bittering. Not much hop aroma is left from the Tettnanger addition at 10 minutes. A clean ethanol bite, not too surprising from a ~10% ABV at cellar temp ~60 F.

Mouthfeel – Rich and full, honestly it has enough body to hold up without carbonation, but it still would be better with some fizz.

Drinkability & Notes – I'm really pleased with this one, but at 5 months in the bottle it will probably take some additional yeast to get any carbonation. I think the original Adam is a smokier beer, so if you are looking for a true clone I would up the amount to what was originally called for, but it is great as is. Not much I would change if I brewed it again, but the sample of Cherry Adam from the Wood I had a month back was enough to convince me that cherries (subtle) and bourbon soaked oak would be a good addition to this one.
The Mad Fermentationist (Mike) at 7:38 PM