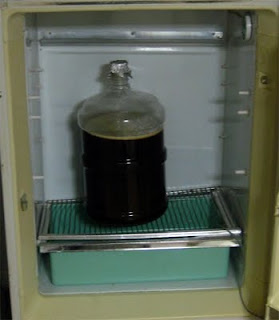 With a yeast cake of White Labs 300, Hefeweizen Ale Yeast, left over from my Extract Hefeweizen sitting in my fridge I wanted to brew something with it. I considered doing a Dunkleweizen (Dark German Wheat) or a Roggenbier (German Rye), but with cold winter weather approaching I decided to step it up and do to my first Weizenbock. This is a rich, generally dark, wheat ale typified by Schneider Aventinus. Rather than having the big banana character of a Hefeweizen, Weizenbock has a more complex fruit character with banana mingled with dark fruit and a firm Bock-ish Munich maltiness.

I decided to go with a pretty moderate gravity for this batch (1.075), I wanted it to be big and flavorful, but not so big that I couldn't enjoy a pint on a weeknight. In general I like beers in this middle range (6.5%-8.5% ABV) sitting between session ales and the big monster alcohol bombs.

For most of the malt I went with a pretty standard mix of dark Munich, Vienna, and wheat malt. Instead of adding pilsener malt for the rest of the base I added some Marris Otter, which will add a bit more depth of maltiness that I don't get from pils in such a rich beer. I also added some Simpsons Extra Dark Crystal which added a wonderful character to the lagered Wheat Triplebock I brewed last fall. It adds a nice combination of dark fruit with just a hint of coffee, as well as some nice color. I went a bit lighter on it than I did in the Triplebock because this is a lighter beer that I want to be easier drinking.

I kept the fermentation pretty cool (58-60 ambient) to ensure that this beer turns out pretty moderate in terms of alcohol and ester character. After fermentation finished I gave the beer some time at 45 to allow the yeast to drop out and the flavors to meld. 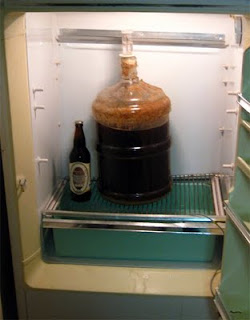 Fly sparge. Collected 6 gallons of 1.055 wort. Added 1/4 tsp of CaCl to the runoff to drop the pH and ensure a good hot break. 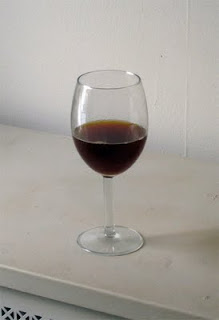 Pitched after ~4 hours with 60 seconds of pure O2. Good fermentation by 8 hours.

Good hard fermentation, a bit of blowoff after 2-3 days.

10/27/09 Racked to a three gallon secondary. Took out of fridge, left at basement temp.  Extra beer racked into a growler and primed.

11/29/09 Bottled with 2 5/8 cane sugar. The growler was very tasty a few weeks back shared with a few friends, so I have high hopes for this one.