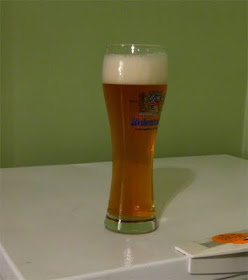 After a few weeks under pressure in the kegs my first two "return to extract brewing" experiments are ready to taste. Both of them turned out well, clean (no mythical extract twang) and surprisingly pale.

If you are an all-grain brewer I'd suggest giving an extract batch a shot if you are short on time some day. You may not have quite as much control as you are used to, and it may cost a bit extract, but it can certainly produce excellent results.

Appearance – Slightly hazy golden-orange body. Certainly lighter in color than most people think an extract beer can be, and certainly no darker than my decocted all-grain hefeweizen (if anything it might be a bit lighter). Nice looking creamy white head, with good retention, but not much lacing.

Smell – Pretty mellow aroma, a slight hint of banana and some spice. It is lacking the bready/yeasty character that great hefes have, but that may be more a result of the kegging (and the lack of yeast) rather than the extract. As the beer warms it begins to show a hint of sulfur, hopefully that will pass with a bit more age.

Taste – The flavor is similar to the aroma, very subdued. The ester character is only banana and a pretty restrained one at that. It is supported by some classic clove notes (not as much as I like though, the ferulic acid rest certainly seems to have boosted the clove in the all-grain compared to this). Pretty dry with just a touch of hop character to balance the slight sweetness. It has a slight carbonic bite to it from the high carbonation, which adds a touch of acidity to the beer.

Mouthfeel – Moderate-thin body with a nice firm carbonation. As it warms and the carbonation beings to wane it comes across as thin, but fresh out of the tap it is just refreshing.

Drinkability & Notes – A solid beer, but it doesn't have the complexity that my all-grain version did. I would like to try this recipe again to a bit higher gravity and with Wyeast 3068 (rather than White Labs 300) which seemed to give me a more complex ester profile. 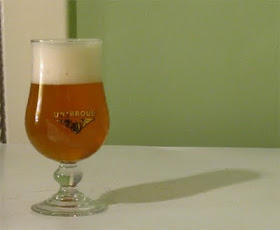 Appearance – Another really great creamy head with great retention, and nice coating lacing. The body is a shade darker (probably due to the liquid extract) and a bit hazier (probably because it is a week younger than the hefe).

Smell – Great complex nose with notes of pepper, and lemon. There is even some breadiness from the malt, or maybe that is just a bit of suspended yeast.

Taste – Great complex phenol character, clove, cinnamon, and pepper. Almost saison like, but not quite that dry. There are some esters as well, pear with a light touch of banana, but the low fermentation temperature kept them moderate. Good balance with just a touch of herbal hop, not as much as I expected from an ounce of hallertau at 5 minutes. It could be a bit drier, but I wouldn't call it sweet.

Mouthfeel – A bit fuller than the hefe, with moderate carbonation. Could be a touch thinner/crisper, but it is very drinkable as is.

Drinkability & Notes – One of the better non-sour Belgian beers I have made, good balance with plenty of complexity. I'll be interested to see where this one goes with a bit more age, hopefully it doesn't clean up too much in the keg. I'll certainly be brewing this one again, although I might boost the sugar to help it finish a bit drier.
The Mad Fermentationist (Mike) at 8:01 PM