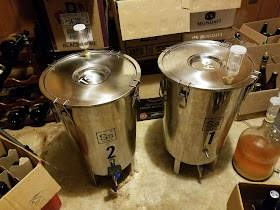 I have nothing against brewing to-style. You can make magnificent and delicious beers by using ingredients from a single region with the goal of a classic balance. That isn't who I am as a brewer though. The recipe for Sapwood Cellars' False Dragon is the sort that I'm passionate about. We selected ingredients from all over the globe to create a flavors and aromas that aren't authentic to any one tradition. What I wanted was an earthy-crisp malt flavor, a white-winey hop aroma (for less money than Nelson Sauvin), and a subtle spicy and fruity-boost from the yeast without getting in the way. That required malts from America and England, hops from America and Germany, and yeast from England and Belgium. 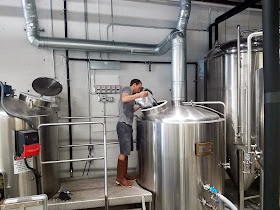 I'd been experimenting with the hop bill for a few months to get the ratio right, and eventually settled on 2:1 in favor of Mosaic. After a few test batches, Scott and I have embraced adding less expensive hops on the hot-side (Cascade, Columbus, Chinook, Centennial etc.) with the more aromatic and expensive varieties saved for the fermentor. I wanted to split my homebrewed test batch to compare S-04 alone against S-04 with 8% T-58. As with Ziparillo, dry yeast is cost-effective especially if you can't repitch thanks to early or mid-fermentation dry hopping. Belgian strains have shown heightened biotranformation abilities is some studies, so it seemed like a good candidate for double dry-hopping. 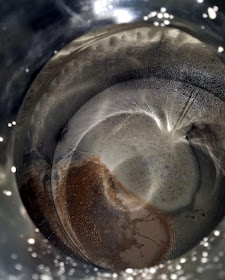 For the 10 bbl batch we decided to fill-in a gap in our range when the first batch of Rings of Light (our Citra dry-hopped hazy pale ale) came in under-alcohol at 4.8% thanks to lower-than-expected efficiency. In effect the two recipes switched places with False Dragon becoming the "bigger" pale ale at 5.3% rather than the 4.7% of the test batch. Our attenuation has been lower than expected across the board for our first five batches too. We're still trying to figure out the cause given it has happened with multiple yeast strains - likely mash related. Luckily our hop flavor and aroma have both been wildly better than either Scott or I have been able to achieve at home, I'm sure surface-to-volume ratio plays a role.

Your first chance to try this beer is at the Sapwood Cellars grand opening, Noon-10 PM on Saturday 9/29. We'll be open Thursday-Friday 4-10 PM and Saturdays Noon-10 PM from then on. Stop in, drink a beer, say hello!

The name False Dragon come from The Wheel of Time series of books by Robert Jordan. My commute has gone from 20 minutes on the subway to my desk job to ~40 minutes by car. Audio books are my new friend. While I'm sure brewing podcasts would be a more productive use of my time, after 12 hours brewing it is nice to have a little escapism. 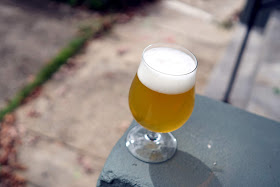 Smell – Had to go for a fresh pour after taking photos as it had gone a hint skunky after five minutes in the sun… Nose is a fresh “true” hop aroma to the Mosaic and Hallertau Blanc. White wine, but also some blueberry and green/herbaceous. Certainly Nelson-reminiscent, but a unique character as well.

Appearance – Pale yellow, pleasantly hazy. Good head and lacing, but the foam itself feels airy on the tongue. I guess I’ve gotten used (and miss) to the contribution of chit malt.

Taste – A firm amount of bitterness in the finish, but it doesn’t linger. Light and bright with the tropical-fruity hops starring. Rye doesn’t really make a strong showing, although I’ve always found it more subtle than some others taste.

Mouthfeel – The rye helps prevent it from being watery, but it is a summery pale ale. Glad we ended up a little higher OG/FG on the big batch. Medium carbonation, nice for a lighter beer.

Drinkability & Notes – A pleasant session IPA. The Mosaic and Hallertau Blanc work better together than apart.

Changes for Next Time – 10% chit in place of the base malt wouldn’t hurt. Could certainly up the rye too for a bigger contribution. 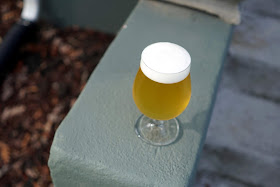 Smell – More rounded, less grassy-distinct hop aroma. Tropical, juicy, inviting. The green flavors are now more honeydew melon. Impossible to say how much of that is actual hop chemical reaction, or synergistic between the hops and esters. Lightly bready.

Appearance – Looks similar in terms of head, color, and clarity.

Taste – Lower perceived bitterness. A more saturated/integrated fruity hop flavor. Passionfruit especially. I think this is the more approachable and interesting beer, and distinct from the other English-only fermentation we are doing (using RVA Manchester). Slightly elevated phenols, but much lower than from the WB-06 in Ziparillo.

Drinkability & Notes – I was able to identify these pretty easily in a blind tasting. It is amazing how much impact such a small amount of yeast can make.

Changes for Next Time – We decided to back down the T-58 4.4% of the blend to allow a bit more of that fresh/distinct hop character through. Other than the higher gravity, the recipe was otherwise unchanged for the 315 gallon batch! We’ll probably up the rye for batch #2 now that we know we can handle higher percentages of high beta-glucan huskless grains.

Added heat to maintain a whirlpool temperature of 200F.

9/2 Hooked up to gas and tapped to remove sludge. S-04 batch clogged poppet a few times. 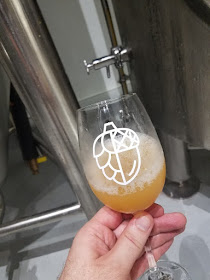 The Mad Fermentationist (Mike) at 7:39 AM