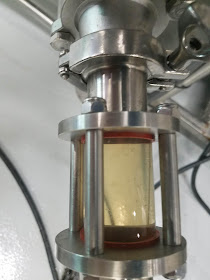 My homebrewing-rate has slowed dramatically the last couple months, not coincidentally we brewed our first batch at the brewery around that time (House Saison brew day). Part of that is brewing 10 bbls about twice a week, the rest is how much time I spend at the brewery doing other stuff. My plan for The Mad Fermentationist is to keep up the same style of post, with recipes and tasting notes for occasional Sapwood Cellars beers. I'll still document homebrew batches when I can, mostly test batches or experiments with impractically weird ingredients.

The first beer I wanted to cover is my favorite of the initial four clean batches, Rings of Light. For those interested the name, is a subtle The Fellowship of the Rings reference: "They watched the pale rings of light round his lanterns as they dwindled into the foggy night." It is exactly the sort of beer I love drinking, moderate alcohol (4.8% ABV), but with a huge hop flavor and aroma and a surprisingly luscious mouthfeel. Luckily Untappd reviews have been pretty positive, and it is our tasting room's top seller so far!

You'll likely recognize most of the elements of the recipe as things Scott and I have been doing for years. Golden Naked Oats, Chit malt, Boddington's yeast (RVA Manchester), moderate-high chloride and sulfate, less expensive hops in the boil (Cascade and Columbus), and Citra dry-hopping. We added mid-late fermentation additions to several of our other batches, but this one was soft-crashed to 58F before dry hopping so we could harvest the yeast for re-pitching into an IPA (Cheater Hops) and DIPA (Uncontrollable Laughter). 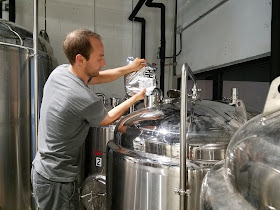 The process tweaks have mostly been to account for the differences related to the physics of working at scale. For example, usually I'd add a small dose of hops at 15 minutes to up the bitterness, but in this case the extended contact after flame-out makes that unnecessary (between whirlpool, settling, and run-off near-boiling wort is in contact with hops for more than a hour). In fact, we added one barrel of cold water at flame-out to lower the whirlpool temperature to reduce isomerization. Beersmith 3 includes the capability to specify the average temperature of the wort during the whirlpool, still the estimate seems to be wildly higher than the perceived bitterness. I wonder if the hops settling, mixing with the proteins in the trub-cone slows the isomerization rate?

It has taken a little time to dial in our Forgeworks brew house. We achieved slightly lower efficiency and attenuation on this batch than expected for example. We've made a few mistakes and miscalculations along the way, but given neither of us had brewed frequently at a commercial scale I'm happy to report that things have been relatively smooth. Our biggest issues have been with the durability of the equipment itself. For example the rakes in the mash tun detached from the motor twice, and our burner shorted after a boil-over. What is taking the most effort to optimize is our cleaning and sanitation regimen. 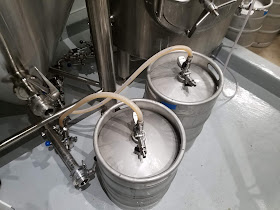 Thanks to everyone who came out to our grand opening last weekend! I didn't expect as many fans of the blog to drive from an hour or more away to try the beers and say hello. Either Scott or I will be there most of the time we're open, so let us know! Happy to show you around and talk brewing. For those further away, I'm also running the brewery's Twitter and Facebook accounts for now (Scott took Instagram because I couldn't figure it out). 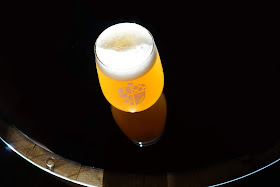 Smell – Pleasantly mango-melon hop aroma. As it approaches room temperature I get a slightly toasty-vanilla-richness thanks to the yeast playing off the Golden Naked Oats. Otherwise a pretty clean/fresh aroma.

Appearance – Pleasantly hazy yellow, glowing in the right lighting. I guess we did an adequate job avoiding oxygen pickup during transfers and kegging as it hasn’t darkened! We certainly pulled some hop matter into the bright tank, but it mostly settled out and stayed behind when we kegged, as I don’t see any particulate in the pour. Head is really thick, but could have better retention.

Taste – I really love the flavor on this, really saturated with juicy hops. Similar to the aroma, the tropical flavors from the Citra dominate the Cascade and Columbus. We were surprised how hop-forward it was even before dry hopping (perhaps thanks to the deep kettle slowing the evaporation of the oils?). Bitterness is pleasant, but restrained. Well below the estimated 70+ IBUs, more like 40-50 to my palate.

Mouthfeel – Full bodied, especially for a  sub-5% beer. That is thanks to the oats, and low attenuation (which allowed for more malt for the given alcohol). As usually the substantial texture of the head from the chit malt really enhances the perception of creaminess.

Drinkability & Notes – Glad this beer ended up as an early-fall release. It is a little full for a quenching summer pale ale, but it is perfect for temperate weather. The hops are well balanced, and provide enough interest to demand each additional sip. The malt mostly stays hidden, while providing adequate support.

Changes for Next Time – We’ve already got a new batch of this fermenting with the same grist and kettle-hops, although given the tweaks (higher original gravity and different yeast: Lallemand New England and S-04) it may receive a different name.

All salts and 100 ml acid right after mash-in. Ran rakes for 15 minutes, started recirculation 10 minutes after mash in. After 10 min of recirculation, measured temp at 152.8F.

Added 1 bbl of cold water at the start of the whirlpool. Combined temperature 196F, added hops.

Ended up with a wort temperature of 64F. Set tank to to 66F. By the next morning the glycol chiller had popped the breaker and the tank was at 69F... Reset and lowered to 67F.

9/3 Fermentation appears nearly complete from lack of CO2 production. Tastes good, better hop aroma than expected. Up to 70F to ensure it is done before soft crashing.

9/7 Dry hopped with 22 lbs of Citra through the top port while running 25 PSI of CO2 and blow-off arm closed. Closed everything and add 5 PSI as head pressure.

I get a commission if you buy something after clicking the links to MoreBeer/Amazon/Adventures in Homebrewing/Great Fermentations!
The Mad Fermentationist (Mike) at 6:51 AM