NEIPA has a well-deserved reputation for short shelf-stability. I've heard homebrewers refer to it as intentionally poorly brewed... but that's like saying a souffle is poorly baked because it sinks minutes after you remove it from the oven. If there was a way to achieve a beer with the same juicy hop flavor and pillowy body plus long shelf life I wouldn't complain! 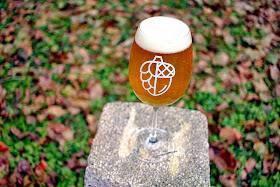 There are brewers like John Kimmach, who says Heady Topper is at it's best at 10 weeks old. I've heard brewers from three or four other breweries advocate holding onto their hazy IPAs (especially the double-dry hopped sorts) for a month or two. Not exactly cellaring potential, but better than the versions that fall apart after a couple weeks.

Cold storage and minimizing oxidation both improve stability, but what else can we do to extend the life of hazy IPAs? Wheat and even more so oats contain higher concentration of manganese than barley malt. Manganese can catalyze oxidative reactions as well as increase protein solubilization. However, I don't think you can drop wheat and oats from a NEIPA without replacing the extra protein contribution, which adds body and head retention (not to mention haze).

To replace the protein usually imparted by flaked grains, Scott bought a sack of Best Chit Malt and shared a few pounds with me. Chit is essentially the Reinheitsgebot-approved replacement for unmalted barley. It is under-modified, retaining a range of long-chain proteins. Theoretically these proteins could fill the same role as the oats/wheat, enhancing foam and mouthfeel but without the associated drawback to stability. For the first try, I used chit at about the same rate I would flaked oats, 20%.

For hot-side hops, I went for a budget option as I did in my previous batch. For that last batch I used Chinook and Nugget to provide linalool and geraniol. For this batch I used Columbus and Simcoe. Columbus makes up a large portion of the kettle hops for many of Trillium's fantastic IPAs, providing a nice dank base-note to balance the fruity hops added on the cold-side. I added the Simcoe to the boil because the 3MH it contributes increases during the boil (while catty 4MMP decreases). Certain yeast strains have the ability to converts 3MH (grapefruit and passion fruit) to 3MHA (similar flavors with a lower threshold). Something we'll be playing with at Sapwood Cellars!

Rather than talk about the brewing process for the 200th time, I took videos of the key points in the process and posted them to my YouTube channel with my descriptions, plus a version without a voice-over. Enjoy! I'm hoping to do more of this, especially as the brewery gets up and running and I have more interesting action to record!

Smell – Pleasant mixture of tropical and lightly dank. As always I appreciate a balance rather than the “straight juice” aromatics of some examples. If I want a fruit beer, I’ll drink a fruit beer! The volume could be turned up, despite the heavy hot-side, fermentor, and keg hopping it doesn’t leap out of the glass like my favorite batches. A result of the yeast or something else? Clearly it isn't malt aromatics in the way.

Appearance – It isn’t clear, but it certainly looks more like an unfiltered West Coast IPA than a standard NEIPA. I don’t brew for appearance, but there certainly is some eye-palate interaction that it doesn’t fit. There are some suggestions that above a certain point more proteins (especially large proteins) are likely to coagulate and drop from suspension. It was hazier the first few weeks, but it cleared up in the keg.

Taste – Crisp, missing the malt sweetness to support the fruity volatiles. The saturated hop flavor is nice, again walking that line between fruity (grapefruit and passion fruit) and dank. Malt is subdued, could use a boost from a portion of English malt or crystal malt. A friend commented that it has a zwickelbier-like maltiness, hard to argue with it being more subdued than most.

Mouthfeel – While the head lasts it is thick and luxurious. It really adds creaminess to the body. While retention started off lackluster for the first couple weeks, it really came into its own. Although after the head fades the body is lackluster. Thin, crisp, just a hint of tannins in the finish. The screen did a good job keeping the powder burn to a minimum.

Drinkability & Notes – It is a unique interpretation of the style. Somewhere between the crispness and cleanness of a Russian River IPA, and the fruity-tropical hop character of NEIPAs. While I don’t want sugary, I think the style benefits from a little perceived sweetness. Drinking this seven weeks after brewing I have to say that it did hold up better than my typical oat-heavy NEIPAs!

Changes for Next Time – A little iso-hop extract might add the longevity the head needs. In exchange I’d move the 10-minute addition later or slightly cool before adding the whirlpool addition. Maybe a small dose of light crystal malt to add sweetness?

Chilled to 76F, placed in the freezer for an hour before pitching, and shaking to aerate. An hour later down to 69F, moved to 63F room to ferment. Internal ~68F for most of primary.

10/20/17 Kegged with the Cryo in the stainless steel canisters. Mosaic and Citra were pellets, Simcoe was powder.


I get a commission if you buy something after clicking the links to MoreBeer/Amazon/Adventures in Homebrewing/Great Fermentations!
The Mad Fermentationist (Mike) at 6:11 PM