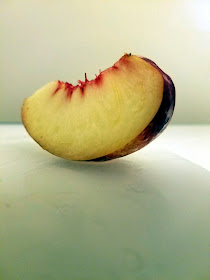 Vanilla and fruit are an undeniable combination in desserts. As far as beer goes, it’s gained new popularity in Milkshake IPAs. But it isn't a new combination for sour beer, going back at least the original Cantillon Rosé de Gambrinus (and more recently Zwanze 2016). I decided to try adding a vanilla bean to a quick sour with white peaches and nectarines to provide depth and balance.

My concept was similar to the "Pop" series from Grimm Artisanal Ales - although I was unaware of them until after brewing. I sampled the Pineapple variant while mine was carbonating and wasn't disappointed by the bold flavors! My base beer and process shared more than a few similarities with previous batches (including Rhubarb Berliner, Atomic Apricot). Simple pale grist including oats for mouthfeel, no-boil to retain fresh malt aromatics, and no hops in the kettle.

For souring, I turned to GoodBelly probiotics for the first time. While I could have selected a complimentary fruit flavor, I added two “Straight Shots.” Lacto grows remarkably quickly, so no need to make a starter if they are fresh. I only chilled the wort to 85F with my Therminator plate-chiller. There is no need to maintain a high temperature or worry too much about oxygen contact when souring with a pure culture, so I allowed it to slowly cool to my target pitching temperature of the ale yeast to follow. I boiled the remainder of the wort and it continued on to become Nelson Thyme Saison. 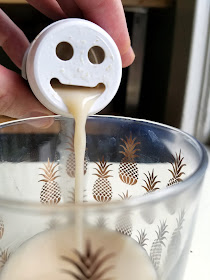 After a day of souring I pitched Safale S-04, and shortly after added a split vanilla bean - which incidentally have doubled in price over the last year! The following weekend I visited the local farmer's market and bought a total of 10 lbs of white peaches and nectarines (two of my favorite fruits for sour beer). The nectarines were perfectly juicy and aromatic a couple days later, peaches were a little dry and mealy but still usable. The beer was actually pretty good even before adding the fruit, with the vanilla playing with the doughy malt.

This recipe would be a good candidate for lactose to taste, to reinforce the perceived sweetness that vanilla and fruit contribute, but considering that I’m about to open a vegan brewery… I thought better of it. Instead to replace that “creaminess” I planned to serve the beer on beer gas through my stout faucet. The problem with sour beers (especially quick sours) is that their head retention is often lacking. To combat that, I lowered the pH of the wort pre-souring to inhibit proteolysis by the Lactobacillus.

I wanted more insurance than that though. Reduced isomerized alpha acids can be terrifically foam-positive, but I couldn't find a reasonably sized/priced homebrew-scale source (e.g., Head Master). I so emailed a couple producers and Kalsec obliged with samples of their Tetralone and Hexalone (tetrahydro- and hexahydro-iso-alpha-acids). These are already isomerized – so no need to boil them to impart bitterness like the typical CO2 hop extracts. I added 1 g of the Tetra at kegging for 5 gallons, enough for 6 IBUs. Incidentally Tetra-hop extract used by Miller to allow them to sell beer in clear bottles with no risk of skunking. Could be eye-catching to serve a fruited sour from clear bottles... 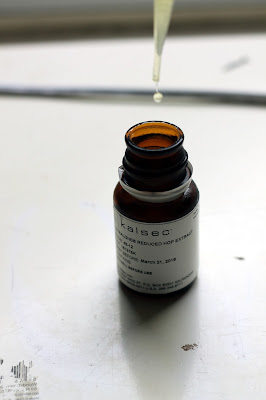 Smell – Nice fresh white-stonefruit aroma, especially as it warms. Some doughiness (like uncooked pie crust). Vanilla adds depth, but isn’t immediately recognizable. Pleasant aroma, but doesn’t jump out of the glass - partly due to low carbonation.

Appearance – Not a spectacular head in terms of volume or retention, but pretty good considering it is a no-boil fruited quick sour! Tetra seems to have done a pretty good job. The creamy nitro-head doesn’t last to the last sip like some of the stouts I’ve run through the tap, but it is solid. The base itself is hazy and pale yellow.

Taste – Flavor has a nice tartness, sort of citric in the finish. Bright and quick. GoodBelly's L. plantarum did an admirable job, no weird Lacto-gaminess.  Solid fruit, but not the intensity I was hoping from such good nectarines. In some previous no-boil’s the doughy flavor has played well with the fruit, but in this case it muddies the fruit and vanilla. I don’t taste a contribution from the hop extract, so it likely could be increased. Nice lingering white peach aroma.

Mouthfeel – While the head survives it adds creaminess to the palate. Other than the low carbonation, a pretty typical light-sour thin body.

Drinkability & Notes – It’s a really pleasant, sort of weird/unique sour fruit beer. A good first try at something new, but I probably wouldn't order a second pour of it at a bar with other things to sample.

Changes for Next Time – Maybe a little light crystal malt to add some perceived sweetness. Boil before souring. Double to hop extract to see if that improves the head retention. More fruit (or better peaches) and maybe even another vanilla bean if it needs it. Half a pound of lactose would be a nice addition if you want it to add a little sweetness. 1/2 tsp dissolved in warm water in the bottom of the glass cuts through the acidity, make it more like dessert. 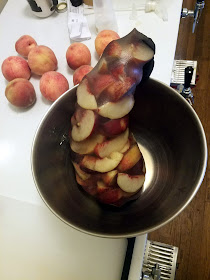 9/02/17 Added 6 lbs of White Nectarines and 4 lbs of White Peaches (weight before pitting and slicing). Bagged in new nylon knee-highs to contain the pulp.

I get a commission if you buy something after clicking the links to MoreBeer/Amazon/Adventures in Homebrewing!
The Mad Fermentationist (Mike) at 6:56 PM