As I continue to work on opening Sapwood Cellars (lease negotiation ongoing!!), Audrey has started to pick up the homebrewing slack. After her Dark Belgian Wheat she brewed Wit Lightning inspired by Belgian wit, but with citrusy hops (Azacca) replacing the spices. I took half of the batch and pitched Omega Labs C2C American Farmhouse and dry hopped with more Azacca to make a lightly funky saison... Saison Lightning.

Despite some fancier primary fermentors with spigots (Ss Brew Bucket and Speidel), my post-fermentation-transfer game is basic. I do most of my racking via gravity and auto-siphon. It gives me control, and I haven’t had issues with oxidation on NEIPAs and other oxygen-sensitive styles as long as I purge the keg. Open transfers aren't really an option for carbonated beer though.

I wanted to combine Brett fermentation under-pressure and dry hopping. I did the first dose in primary to allow time for bioflavoring, but I wanted the Brett to have time to work before the final dose of hops to create developed Brett and fresh hops aromatics. My solution was to naturally keg-condition for six weeks and then jump the carbonated beer to a purged serving keg containing bagged and weighted hops.

When transfering carbonated beer between kegs, the goal is to have slightly more pressure on the filled keg than the receiving keg so that the beer is gently pushed from one keg to the other without the beer foaming. This is essentially the same method as counter-pressure filling a growler or bottle only on a larger scale. 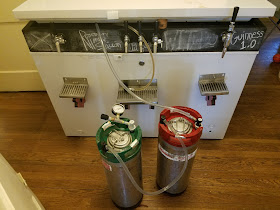 Process:
Step 1: Purge and then pressurize the receiving keg to the same pressure as the filled and chilled keg (15 PSI in this case).

Step 2: Connect the filled keg to a tap and dump the first pint to remove most of the sediment.

Step 4: Connect the gas line to the filled keg to and increase the pressure slightly (17 PSI in this case).

Step 5: Connect a spunding valve to the receiving keg and set it to the same pressure as you pressurized the keg earlier (15 PSI).

Step 6: Wait for the transfer to complete (approximately five minutes).

Step 8: Connect the serving keg to the gas and serving line and enjoy reduced sediment beer!

This is also a great technique if you travel with kegs and want sediment free beer so yeast isn’t knocked into suspension during transit. 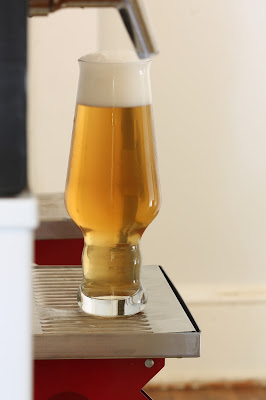 Smell – Varied aromatics of herbal lemongrass, apples, and pepper. Brett is subtle, behind the hops. Hops aren’t grassy or vegetal despite extended contact with the pellets in the keg.


Appearance – Slight haze, but overall it is a bright beer. Yellow gold. The white head is thick, but drops after a few minutes.

Taste – Similar to the nose with bright-integrated citrus notes on a peppery saison backdrop. The finish has a hint of earthy Brettiness. Deceptively complex because it is easy to drink. Mellow hop bitterness. Slight perceived sweetness thanks to the citrus character and slightly higher than expected final gravity.

Mouthfeel – Thin and crisp without harshness and tannic bite. Carbonation is a little low for a saison.

Drinkability & Notes – Crushable hoppy saison, has been a perfect beer to have on tap for summer. The hops cut through the Brett and everything works together.
Held up well in the keg so far (kicked the next day), which I assume means I didn’t introduce much oxygen when I jumped it over.

Changes for Next Time – Not much to change for this, although I'd lower the mash temperature if I was planning on the same timeline again. Could have given it another couple of months in the keg to condition before going onto the keg hops for a little more Brett character.

No sparge. Mash pH measured at 5.24. Collected 7 gallons of 1.039 runnings. A bit lower gravity than expected, extended boil to 90 minutes.

Chilled to 69F. No starter, pack less than a month old. 2 oz of brew day Azacca.

5/6/17 Kegged with 3.75 oz of table sugar and was left to condition (no extra dry hops yet). A bit less attenuation than expected.

6/16/17 Jumped to a freshly purged keg with more Azacca weighted with marbles and bagged in a knee high.

I get a commission if you buy something after clicking the links to MoreBeer/Amazon/Adventures in Homebrewing!
The Mad Fermentationist (Mike) at 6:20 PM