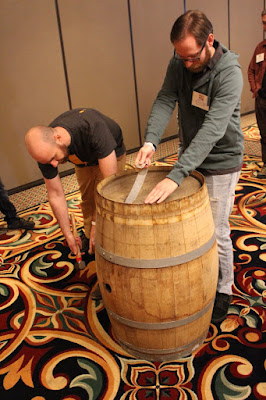 Most of the events I do are 30-60 minutes, perfect for talking (ideally including questions from the audience). A few years ago I taught intro-to-homebrewing classes for LivingSocial, I quickly learned that 150 minutes was too long for a lecture alone. I added an extract brewing pantomime to demonstrate the key steps in wort production, brought ingredients to taste and smell, and loaded up with slides with photos to hold the audience's attention.

When Brew Your Own asked me to present on sour beers and barrels for their Boot Camp series, I knew I had to come up with ways to make it interactive to fill six hours! Obviously some of the time is me talking and flipping through slides and answering questions, but I wanted to mix in drinking and action. I've honed the sessions in Burlington and Santa Rosa, and I'm looking forward to the next two November in Indianapolis and February in San Diego!

Speaking of which, I thought I'd post a mini-tasting of that split batch for those of you who can't make it to the Boot Camps. This batch is a somewhat extra-hefty 15 gallon batch of English brown: infused with malt whiskey from Balcones Distilling, aged in a 5 gallon Balcones malt whiskey barrel, and aged on a medium toast American oak honeycomb from Black Swan Cooperage! 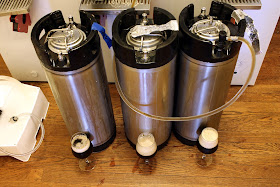 Appearance, all three look nearly identical. Deep dark brown with a three finger tan head. Beautiful lacing, although it appears too quickly as the head drops in just five minutes.

Integrated slightly spicy oak and spirit. Brighter than the liquor, less dark fruit and sugar. Notes of toast and light roast coffee come through from the malt much better. Fresh plums. Drier than the liquor infused thanks to the oak tannins. A more balanced beer that I could consider drinking more than 6 ounces of in a sitting. Likely could have sat in the barrel longer if I knew I was going to sit on it for a year.

When this beer was young it was really raw and boozy. Both classes had sizable contingents that guessed this was from the whiskey barrel. It is still potent with a mild ethanol warming, but it has rounded out with dark sugar and caramelized plum joining the rich malt. Still a little dry, but age has really brought the flavors together. Nice vanilla as it warms, almost bourbon-soaked chocolate brownies. 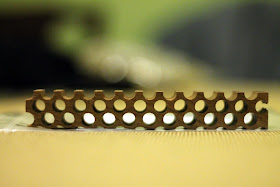 Had and continues to have an off-putting phenolic character that reminds me of cheap wood. On the edge of plastic. The flavor is bland and the oak again dominates. I’ve had some wonderful results from oak aging beer with cubes, staves, and spheres… I’m not adding honeycomb to that list. It didn’t appear to be well toasted (in fact none of the sample from their mixed pack appeared well toasted).

An interesting comparison to see what stays the same and what is different. I've had good luck with barrel-alternatives, but I've gone back to cubes after the results from the honeycomb. 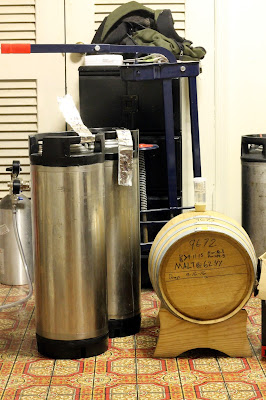 All filtered DC tap water with 14 g of CaCl. Minimal sparge with about 4 gallons of cold water.

Chilled to 80F with ground water, left at 65F for 12 hours to chill the rest of the way before pitching. 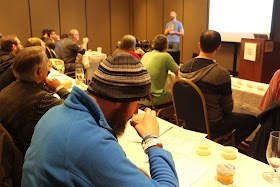