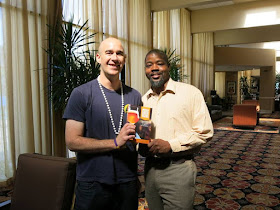 It feels like every other blog post or BYO Advanced Brewing article starts with me in some exotic location meeting an interesting person or drinking a mind-blowing beer that sparks an idea for a batch... this one starts October 2014 when I spoke at the Dixie Cup in Houston, Texas. It is the final competition in the Lone Star Circuit, and the banquet marks the end of the local homebrewing competition season. Among the highlights were a visit to St. Arnold's Brewing, listening to a fantastic presentation about hops, the rowdiest awards banquets of my life, judging a specialty category of "Best Beer to Chase a Hurricane," and a "barleywine breakfast" that was heavy on the vintage barleywine, light on the breakfast. 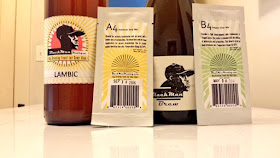 One of the people I chatted with was Barrett Tillman, who was just getting Blackman Yeast running. Apparently I made a good impression because a few weeks later a box of samples showed up: both his first-and-still-only dried souring cultures, and a couple of homebrews (not to mention a note on what appeared to be on a surplus thank-you card from his wedding). Barrett's cultures are just brewer's yeast and bacteria (Lactobacillus and/or Pediococcus), bring your own Brettanomyces. It is a unique and interesting approach because Brett can come from so many sources and  provide such a range of flavors. As a power-user it is nice to have acid-production and funk as two separate dials (the same way I like my spice-rubs to be salt-free so I can add more without over-salting). To be as fair as possible, not wanting to judge his B4 Belgian Sour Mix on someone else's Brett, I added the bottle dregs from Barrett's delicious homebrewed Lambic for funk and to clean-up after the Pedio. 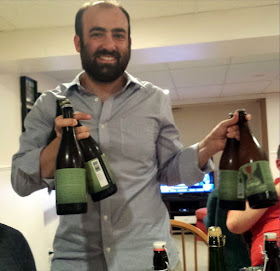 My friend Matt had been considering starting to homebrew, to entice him I invited him over to split a batch of pale sour beer. A few weeks earlier I'd been over to his house for a tasting and he'd selected a few choice bottles of De Garde, Cantillon, and Modern Times for dregs for the other half of the batch. I must have left the culture in the pressure-canned mason jar of wort with a loose lid for a few days too long before transferring to a bottle with an airlock, because by the time we gave it a smell it was pure malt vinegar. Since then I received a free sample of reCap mason-jar lids and water-less airlocks that are have hold up for two weeks without issue.

Luckily I'd also grabbed some dregs from more than a couple bottles of Hill Farmstead Anna that my friend Mike had stockpiled (including an especially good batch dubbed "magic" Anna). Hill Farmstead bottles their saisons with wine yeast, but the other microbes are likely doing most of the heavy lifting after long aging to this point.

When the two batches were ready Matt and I tasted them and made a few sample blends. It made sense, the BlackMan was more acidic, while the saison culture had better depth of funk and fruit flavors. However, when we blended them they each lost what was special. The combination didn't have the snappy acidity or the depth of funk-character. They were better left to stand on their own! 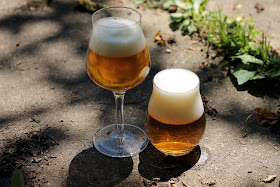 Smell – Lemon and pineapple, has gotten much more interesting since bottling. Even a little farmyard.

Appearance – Similar appearance, clear gold on the initial pour, a little haze on the top-up. White head with poor retention.

Mouthfeel – Crisp without being watery. The acid is a bit grippy. Medium-plus carbonation.

Drinkability & Notes – A more assertive beer in terms of acidity and aroma.

Changes for Next Time – Not much. 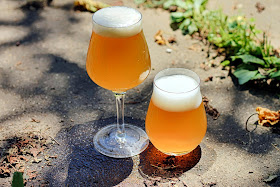 Taste – Soft lemon, lots of hay. Really mellow, like my favorite gueuzes. Lactic acid is tame in comparison, more tart-saison than American sour side-by-side, but it was quite acidic on the first sip. A little Orval in the finish.

Mouthfeel – Feels a little softer thanks to the lower acidity. Similar medium-plus carbonation.

Drinkability & Notes – This is about it for me when it comes to an unblended mixed-fermentation sour beer. A range of fruity and funk, some bright acidity,

Changes for Next Time – Not a wow beer that would show well at a tasting or festival, but the sort of beer I’d get a second pour of… if this wasn’t my second to last bottle.

Bagged hops. Chilled to 85 F with ground water, then 75F with ice.

Pitched 1 L of HF Anna starter. The other half got Black Man Belgian B4, and dregs from a bottle of Barrett's 2013 Lambic. Left at 64 F to ferment.

Racked at some point. 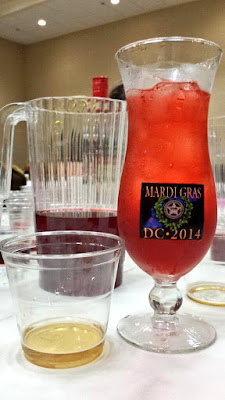