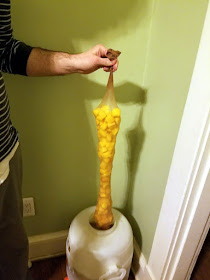 Despite the excessive amount of homebrew I have on tap and in bottles, I still drink commercial beer. It’s been years since I lined up at for a bottle release or bought a case of anything, but I buy singles and flights frequently. Rarely do I go out of my way for a hyped bourbon barrel Russian imperial stout or a classic double IPA. The code has largely been cracked for both of these. Made well they are delicious, but it is rare that I have one that is better than any I have had before. Not saying there aren't similar beers like a Spanish brandy barrel RIS or honey DIPA that aren't deliciously unique! What gets me excited is the interesting takes, surprising ingredient combinations, and passionate focus on a neglected style or process. If the results aren’t to my tastes, nothing lost, but sometimes I get to enjoy something that I wouldn't have brewed.

The “milkshake” IPA concept pioneered by Omnipollo and Tired Hands is just such an idea. NEIPA taken to the logical extreme with fruit and vanilla. The water treatment, hop varieties, yeast strains, and resulting biotransformation used for NEIPAs often produces a flavor and appearance reminiscent of juice. Occasionally a hint of vanilla from the yeast too (RVA 132 Manchester especially). That said, the concept seemed silly, luckily a sample of Tired Hands Mango Double Milkshake IPA at a tasting suggested otherwise. The fruit and hops worked together beautifully with a lingering tail of vanilla.

For the base beer I didn’t stray too far from my usual NEIPA routine, but I thought this would be a good opportunity to add honey malt. It was featured in an IPA recipe from Tree House head brewer Nate Lanie, and in this case the added sweetness and malty-oomph seemed like a match. I went up higher than I ever have on chloride (~200 PPM) to push body. 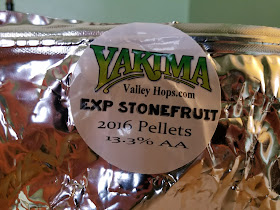 For hops I opted for Experimental Stone Fruit, which were hanging out in my freezer courtesy of Yakima Valley Hops. They didn’t provide a spec sheet, but the name and aroma both suggested peach and apricot (without that aspirin thing that often comes with Amarillo). I repitched Omega HotHead (from Summer Kveik) for orange aromatics, but tried to temper it by lowering the fermentation temperature. Fruit was frozen mango, the selection owing to my split batch on fresh and frozen. Finally half of a split vanilla bean three days before kegging. I debated adding a whole bean but I didn't want to overwhelm the other flavors.

I skipped flour and green apple puree in the boil. I have no issue with haze when it is created as part of the brewing process in the search for aroma/flavor/mouthfeel, but I didn't want to go out of my way to create murk. The original Milkshake was a tongue-in-cheek response to this review by Jason Alström.

Lactose is a common addition to this emerging style for mild sweetness and creamy body, but I wanted to share my creation with a couple vegan friends. I’d also been scared off by the intense sweetness of Aslin Mind the Hop with Passionfruit and Vanilla, one of the best aromas of any beer I've tried, but the flavor was too saccharine for me. If you want lactose, save it to add to taste at kegging. To replace the lost creaminess I’m pouring it on beer gas! Here's a homebrewed Orange Milkshake IPA with a pound of lactose from the fantastic Meek Brewing Co. blog.

The other half of this batch fell off a cliff, so I won't subject you to a full write-up/tasting. It was identical through run-off, but received WLP007 and three 2 oz dose BRU-1 for dry hops. The color darkened compared to this one and tasted stale two weeks after brewing. It was the first batch fermented in my SS Brew Bucket. I glazed over the fact that the “periodic” passivation was supposed to include before the first use... "[I]ron ions can catalytically promote oxidative reactions." Brulosophy had a positive assessment of BRU-1, so I'm not totally writing the variety off! I have my second batch fermenting in the fermentor now with loads of Galaxy and Vic Secret after performing their prescribed acid treatment and air drying. 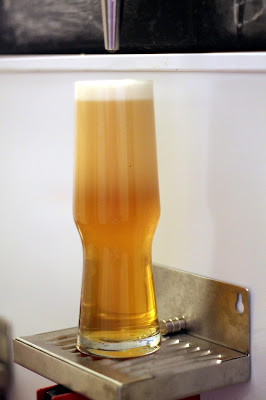 Smell – Mango and hops are balanced, more a hoppy fruit beer than a fruited IPA. Mango creamsicle nose. The fruit and citrus from the hops and yeast keep it from being mango alone. Glad I didn’t add a third dose of dry hops in the keg, it doesn’t need the final hit of raw/green hop aroma.

Appearance – Of course it turned out nearly clear. This is the first pale beer I’ve served on beer gas with the stout faucet. The cascading bubbles don't pop like they do against a dark background, sort of goes from hazy to clear. Nice dense white head.

Taste – Plenty of mango, with the vanilla giving it an almost sherbet flavor. Hops and yeast are somewhat tame, peach and orange. Lingering bitterness, might be better balanced if there were lactose. The vanilla adds some perceived sweetness, but it still comes across as a pretty dry beer.

Mouthfeel – A bit light after the creamy head disappears, not the rich-full body that some other examples of the style have. Light carbonation, no surprise. Happy with carbonating and serving on beer gas alone at 20 PSI.

Drinkability & Notes – It’s a fun beer. Despite skipping the lactose the vanilla plays surprisingly well with the fruity character. I’ll be revisiting something like this again eventually!

Changes for Next Time – Add lactose, up the vanilla bean (time or amount), and reduce or eliminate the bittering hop addition. 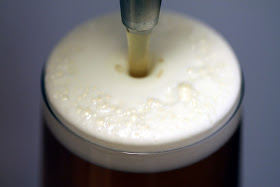 
Measured by Ward Labs, after dilution with distilled and mineral additions.

Extended boil because my gravity was a bit lower than expected.

1.5 L decanted starter of Omega Hothead pitched into half with 2 oz of Experimental Stone Fruit hops. Left at 67F ambient to ferment.

2/7/17 Added half of a vanilla bean, split lengthwise.