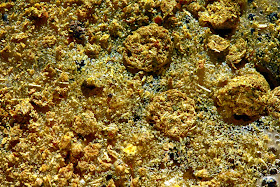 Another hoppy beer... another New England IPA! My goal for this batch was a bright hop-saturated fruit-bomb, or at least a beer to replace the terrible, oxidized mess of an IPA I had on tap! Luckily passivating my Ss BrewBucket Brewmaster with 5X-concentrated StarSan solution (as they suggest) before this batch was successful. Neither the stainless steel nor beer discolor as they did during the previous IPA fermentation. Now that I know the fermentor can produce good beer, I'll say that I like being able to monitor/control the beer temperature via the thermowell, but wish it had an 8 gallon capacity instead of 7. Despite a few drops of FermCap S I still had to clean krausen and hops out of the airlock a couple times during the first two days of fermentation. 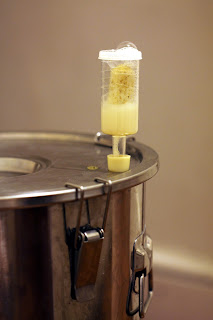 To make this batch as New-England-y as possible I selected two fruity Australian varieties, Galaxy and Vic Secret. I've found Galaxy to be one of the least consistent hops (Bad: Galaxy-Hopped DIPA, Good: Galaxy Wit), but thankfully these smelled wonderfully of passion fruit on opening. This was my first time brewing with Vic Secret, and they struck me as a slightly milder version of Galaxy with more herbal notes. I didn't realize until after brewing that this is the same combination of hops in Avery Raja.

My usual process for NEIPAs is to dry hop around day three/four and then again post-fermentation cold in the keg. For this batch I dry hopped on brew day when I pitched the yeast and again under pressure by racking the beer into a flushed keg when it reached 65% apparent attenuation. I set my spunding valve to 13 PSI and allowed the keg to sit warm for 12 days while I was in New Zealand. I would have aimed closer to 25 PSI, but the markings on the valve are unreliable and I wanted to minimize the risk of over-carbonation. Dry hopping during conditioning has two potential benefits for hoppy beers. First, by holding pressure in the beer less volatile hop aromatics will bubble out of solution (carried by the same CO2 that we want to carry them up to our nose from the glass). The yeast will also scavenge any oxygen introduced during kegging, hopefully extending the life of the beer (although the longer time warm could sacrifice hop aroma). You could accomplish the same goal without a spunding valve if you were confident in what your FG would be... .001 drop from fermentation produces .5 volumes of CO2. 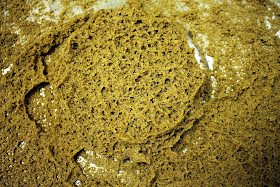 The last unique feature of the recipe was the SafAle S-04 English ale strain (Whitbread?). I'd heard good results things about S-04 in NEIPAs from Ed Coffey. I also wanted to see if it was an option for brewers without regular access to liquid yeasts. Happy to report it does a nice job, a suitable choice even if you have access to 1318, but don't want to make a starter. There are a few other dried English strains that might be worth trying as well!

The other half of the wort is fermenting with my house saison blend and 10 oz of rosemary honey, minus the dry hops for now.

Smell – A wonderfully saturated hop aroma with tropical fruit and a bit of resin. Really pushes fermentation-adjusted aromatics without the more forceful/raw aromatics of a post-fermentation addition. Despite 8 oz of dry hops the aroma doesn’t leap out of the glass (could be yeast or hop variety). 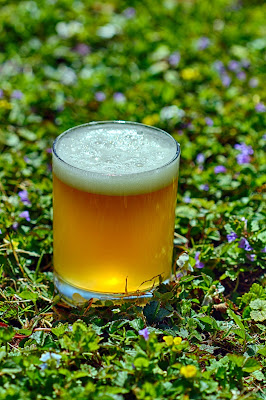 Appearance – Hazy without murk or particulate, not far from a pale hefeweizen. Head retention is alright, but not as dense or thick as some previous batches of NEIPA.

Taste – Bitterness is soft, closer to 40 IBUs than 70 on my palate. Nice long finish of saturated hoppy goodness: indistinct tropical and light fresh pine. Slight yeastiness and doughiness of fresh bread. All the flavors I want are there, but the hop volume is lower than I expected. No diacetyl or other noticeable off-flavors.

Mouthfeel – Really soft mouthfeel thanks to the mild bitterness and lack of harshness from boil hops. Chloride, protein from the oats, and higher FG all contribute as well. Moderate carbonation, still climbing a bit as it sits cold and on pressure.

Drinkability & Notes – New England IPA taken to its softest and juiciest. Easy to drink with enough hop character to bring me back for a second pour, but it isn’t as intense as my favorite batches. The S-04 performed admirably, although it seems to get in the way a bit compared to 1318. It doesn’t pop with a unique character like Conan or Sacch Trois either. A solid choice, but not a new first choice.

Changes for Next Time – Despite the 70 (calculated) IBUs from the hop-stand, it could use 10-20 IBUs from an early-boil charge. Bitterness is a much more complex topic than it seemed when I started brewing, my friend Scott Janish posted a great summary of recent literature discussing how dry hopping tends to pull beer towards 25 IBUs. I could certainly see jumping the cold/carbonated beer to a serving keg with a third dose of dry hops… 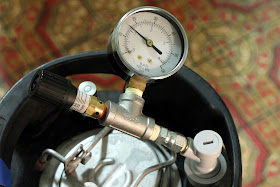 Pitched 5.75 gallons of wort with S-04 directly (not rehydrated) plus 4 oz of Vic Secret, loose.

After 48 hours it reached 70F internal. Moved downstairs to 55 ambient to slow the yeast and help the hops drop out.

3/15/17 Kegged with with 4 oz of bagged/weighted Galaxy. Current gravity 1.022. Attached the spunding valve after purging and pressurizing the head-space.

I get a commission if you buy something after clicking the links to MoreBeer/Amazon!
The Mad Fermentationist (Mike) at 6:25 PM