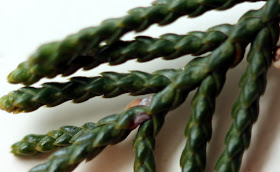 I hope that people get something from my talks at homebrew festivals around the world, because I certainly benefit from the arrangement! My trip to Norway for the 2016 Homebrewers Weekend in Drammen was enlightening on many fronts, but it was the introduction to kveik that has proved the most valuable. Kveik is true farmhouse yeast, with the now commercially available strains passed between local brewers up until only a few years ago. While I enjoyed the test batch with the cultures I brought back, I wanted to try the traditional combination of kveik with juniper and smoke. With the light acidity of those test batches, I decided to buy a fresh pitch of the orange-scented heat-loving Stranda culture from Omega Labs, HotHead.

Traditionally (as Lars Garshol extensively documented) juniper branches, not just the berries, were an indispensable and underappreciated component of traditional brewing across Europe. This is annoying as berries are easy to buy and store, while branches are not. As fate would have it the Eastern Red Cedar in my backyard is in actuality Juniperus virginiana, Virginia juniper! Not the first time I've turned to one of the four trees on our property (mulberry, the others are oak and sour cherry).

I loosely based the amount of Eastern Red Cedar tips on the Sahti recipe in Homebrewer's Almanac (written by the brewers and foragers of Scratch Brewing). It is one of the most inspiring brewing books I've read in years! I enjoyed samples of their beers at GABF a few years ago enough that I'm considering making the four hour drive down to Ava, Illinois when I visit Indianapolis for the next BYO Boot Camp in November 2017. I backed down on their flame-out addition to leave room for the yeast and smoke. 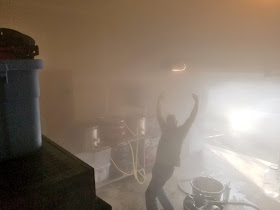 Anytime you forage for brewing ingredients (or anything) make a positive identification of what you are harvesting. I contacted a local arborist to confirm what I had growing. Given the pictures and ranges I saw online I was pretty sure, but pretty sure isn't something to risk your health on!

I'd been looking for an excuse to hang out with Blane, who is opening Sinistral Brewing in Manassas, Virginia. We brewed on the 15 gallon electric system in his garage. He was into the weird idea despite not loving smoked beers, and luckily enjoyed the results. We'll see if it was enough for him to ever brew something like it commercially! We were joined by his friend Carlos, who had foraged for local juniper before to brew sahti (not to mention malted quinoa, and had strong opinions on brewing with corn and chiles - someone I need to brew with again!).

Smell – When it was young, orange from the yeast was the primary aroma. Over the last couple months stonefruit has overtaken with the citrus. "Peach gummy rings" as a couple friends described it. Fresh juniper has a less singular more green aroma than the berries, a little more spruce than gin. Smoke is smooth and woody, not phenolic or sharp. 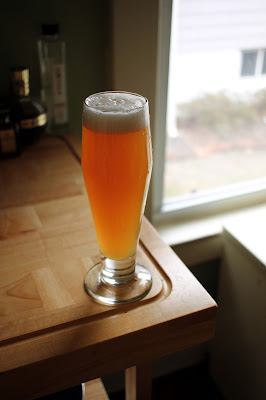 Appearance – I’ve been jokingly calling this one New England Kveik given the glowing cloudy orange-juice body. Head retention is decent, not great. Given some experiments with juniper teas I was expecting more color, but the lower ratio of tree to liquid prevented that.

Taste – Zesty orange, apricot, and fresher herbaceous juniper. I was going for a winter beer… clearly I missed on that! The smoke is firm but fleeting, which works well with the bright fruity flavors. Balanced, smooth, minimal bitterness, but enough to keep it from tasting candied (like my Spruce-Grapefruit India Pale Gruit). I don’t pick anything distinctly rye, but it has a rounded malt flavor likely contributing. Mellow sweetness in the finish.

Mouthfeel – Lighter body than I intended, partly because we undershot the gravity by .010. Medium carbonation keeps things moving.

Drinkability & Notes – It is weird for a smoked tree-flavored beer to be quenching and crushable, but it is! One of the strangest and most intriguing beers I’ve brewed. Authentic? Likely not, but I enjoy adapting flavors and ingredients rather than slavishly recreating.

Changes for Next Time – For a more authentic result I’d move all of the juniper to the HLT and do a longer infusion. I’d opt for a Bohemian Dark (or Munich) for the entire base in place of the Golden Promise. I would also go darker on the Carared maybe CaraMunich II, and add a touch of Carafa as I was originally planning. Not that it would be a better beer, just more in line with my original target. Also makes an interesting blend is the citrusy gose with smoked sea salt on tap next to it. 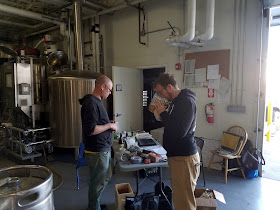 I brewed Kodachrome Dream(ing) with my friend Nathan at the Right Proper brewpub in Shaw a couple years ago. For our second collaboration (and the first at the Brookland production house) we wanted to brew something in the same vane, although more inspired by Alu by Norse (a small amount makes it to the US). Jacob McKean the founder of Modern Times was planning a trip to DC, so we roped him into the plan.

After tasting my batch, Nathan wanted to tone down the assertive fruit flavors from the yeast. As a result he blended the HotHead (harvested from my batch - strangely trusting) with US-05 and lowered the fermentation temperature to 70F. In search of increased maltiness and color, he added CaraAroma and Carafa. He also wanted a more traditional juniper flavor, so we added juniper berries near the end of the boil in addition to 15 lbs of juniper branches at 190F in the HLT overnight for 24 bbls.

Nathan named the resulting beer after a mythical people of the article circle, the Hyperborea. Kegs will be available in DC, Virginia, Maryland, and New York! If you try it, let me know what you think! Sunday March 12 Nathan will be brewing a Nordic IPA with Stone, Pen Druid, and metal band Sunn O))), feel free to stop by the brewery around 1 PM and say hello! Both beers should be on tap through CBC next month! 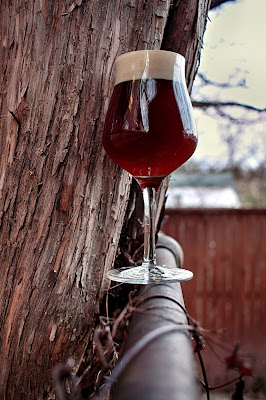 Smell – Brighter than you’d expect for a dark/smoked beer. Mild generic citrus and green-herbal. Light phenolic smoke, the Briess Cherrywood Smoked gives it some sharpness. Touch of toast. Not distinctly juniper from the berries.

Taste – Balanced depth between the combination of toasty-smoke and yeasty-juniper fruit. The Munich and dark malts serve as a malty bridge between the smoke and the fruit in a way that my beer is missing. Minimal hop bitterness. Nice lingering herbal-smoke melding.

Mouthfeel – Medium body, light tannic drying. Carbonation seemed a bit higher in the growler than it was on tap at the brewery.

Drinkability & Notes – For a beer with so many components it really falls into place. Doesn’t quite hit the oomph and richness of Alu, but not far off! Nathan was right to temper the Hothead with US-05 to prevent it from crushing the malt and juniper. 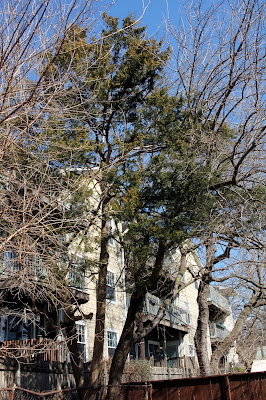 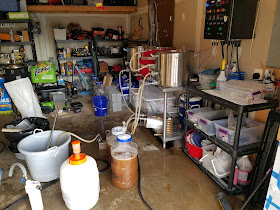 12/16/16 Crashed starter. Harvested Eastern Red Cedar from the tree in my backyard.

Chilled to ~95F and pitched half of the decanted starter into 5 gallons (my share). 5 gallons additional for Carlos, 5 gallons with the Voss culture from Norway (slightly lactic) for Blane.

Fermentation by 6 hours on the radiator insulated in a sweatshirt.

I get a commission if you click the links to MoreBeer/Amazon/Love2Brew and buy something! 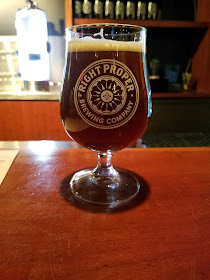 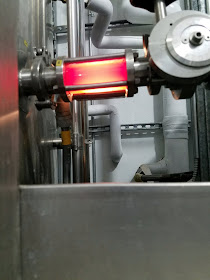 The Mad Fermentationist (Mike) at 7:06 PM