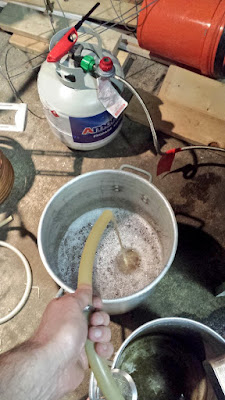 My first attempt at low dissolved oxygen (LODO) brewing was lackluster... generously (I dumped the last gallon of that Pilsner). I wanted to try the intensive process again, replicating both wort production and fermentation as close as I could to what is prescribed in the second version of On Brewing Bavarian Helles. Rather than brew ten gallons of LODO festbier, I split the batch pre-boil aerating half of the wort as a control. I boiled this "HighDO" wort harder and with a copper immersion chiller. The LODO half I gently simmered and then chilled through a stainless-steel Blichmann plate chiller (although it was brazed with copper). Post-chilling I treated the beers identically from cold fermentation through spunding.

At the start of the January meeting I roped 20 members of DC Homebrewers into a blind triangle tasting of these two beers (poured from growlers I had counter-pressure filled 90 minutes prior). Only 7 of 20 (P=.52) correctly selected the odd (LODO) beer out of the three samples. That is a number perfectly consistent with random chance, suggesting that my LODO and HighDO beers were indistinguishable to the average beer nerd. Of the seven who correctly identified the aberrant sample, only one preferred it (four preferred the HighDO, and two had no preference).

After a month of drinking the two beers, I was able to select and identify the beers in my single attempted triangle test. They are similar, but the LODO does have an ever-so-slightly maltier aroma to my nose. Flavors are nearly identical.

As a disclaimer, I intended this test to explore whether my kluged-process LODO made an incremental improvement to this pale lager. I'll say "yes" if you know what to look for, but in the barest of terms. What I’d love to see is someone with a dialed-in system try the same experiment!

A single experiment can’t prove or disprove anything. That's why replication is an essential (if unsexy) part of science. Even under rigorously controlled conditions statistics like this only provide a confidence interval that suggests that the results are not due to chance. Compound this with variability introduced by brewer, brew house, tasters, conditions etc. and you sometimes produce false positive and negatives. That said, blind taste tests are the best way to insulate results from expectation and bias. Triangle tests are a pain to conduct, and put a target on you from people who can swear they can taste the difference. I have a lot of respect for what the Brulosophy folks put themselves through for data (especially after participating a couple times)! Looking forward to hanging out with Marshall in New Zealand in a couple months between talks at NZHC 2017! 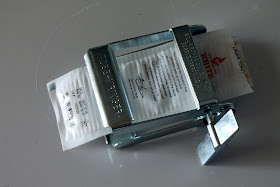 As a side note, Audrey got me this tube wringer for toothpaste, but it works perfectly to extract the last few billion cells from PurePitch packages. White Labs should probably license it and sell an official version!

Smell – Clean bready malt aroma. Pleasant waft of sulfur, although a few tasters felt it considerably stronger than I do. Faint grassiness of noble hops.

Appearance – Slightly-hazy deep yellow. Dense white head sticks around until the bottom leaving patches of lacing down the sides of the glass.

Taste – Malt flavor is well rounded. Crisp, but the 5% crystal malt adds a mild honey-like sweetness. Pleasant herbal hop flavor in the finish. Clean balancing bitterness. Retro-nasal brings the appropriate lager-light-egginess back. It had a flavor that reminded me of the doughiness of a no-boil Berliner weisse when it was young, but that has faded.

Drinkability & Notes – One of the better lagers I’ve brewed. Malty without being heavy. The sulfur is at the top of the my range, likely a result of the cold fermentation and spunding rather than the sulfite.

Changes for Next Time – Unlike my first attempt where the primary issue was double-dosing metabisulfite, this is a pleasant beer! Next time I’d reduce or eliminate the Carahell, and save the effort and brew it with the standard wort production (and warm up the fermentation towards the end)! 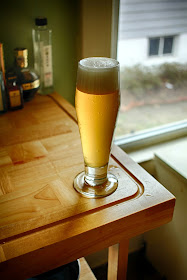 Recipe above is the ingredients for the entire 10 gallon batch.

Made a 5L stir-plate starter. Fermented at room temperature for 36 hours, then crash chilled.

Collected 7.5 gallons of wort as is, 4.5 aerated and left in an aluminum pot until the remainder came to a boil.

Chilled both to 46F, shook to aerate, pitched the decanted starter. Left at 48F to ferment.

I get a commission if you click the links to MoreBeer/Amazon and buy something!
The Mad Fermentationist (Mike) at 7:40 PM