Hot-dog-water, celery, hammy… these are all descriptors I’ve heard for coriander-flavored beers. Nearly essential for wits, sometimes an accent in other Belgian beers (like those from Rochefort). Coriander, the seeds of cilantro, sometimes seem more at home in a taco than a beer, but there are two things brewers can do to ensure it imparts more pleasant aromatics like lemon, lime, and floral. 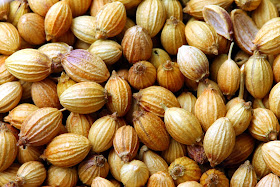 First is one I’ve touched on in previous gose recipes, use Indian coriander. It has a slightly oblong (i.e., more football than basketball) shape than the typical supermarket variety and a much fruitier aroma – Fruity Pebbles. Indian markets are also inexpensive compared to supermarkets and specialty spice stores, a 7 oz bag set me back $1.99 (compared to Amazon for $10).

Second allow coriander-yeast interaction. Glycosides and biotransformation are hot topics in hoppy beers, but they may be even more interesting for beers with fruit and spice. Coriander contains linalool and geraniol, compounds also found in hops. While unexciting in its standard form (floral and rose), yeast activity converts geraniol to B-citronellol which provides a flavor similar to lemon or lime.

"From the screening of various hop cultivars, Citra hop was selected as a geraniol-rich cultivar. In addition, it was observed that coriander seed, which can be used in beer production as a flavourant, contained not only linalool but also geraniol at high levels." The Contribution of Geraniol Metabolism to the Citrus Flavour of Beer 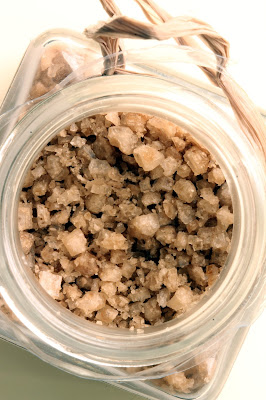 In the past I’ve added crushed coriander near the end of the boil or to the whirlpool, allowing it to infuse into the hot wort. That is also what was done in the study linked above. However, for this batch I drew off wort for this beer pre-boil, adding the coriander directly to the fermentor at the same time as the yeast. The rest of this batch became Loral-Hopped Funky Saison. I've found that dry hopping during fermentation is essential to the "NEIPA" character. I was hoping the same might apply to coriander!

I pitched the Right Proper house lactic culture harvested from my Quinoa Grapefruit Hoppy Sour. I didn’t have access to the high temperatures (October vs. July), and as a result sourness didn’t kick in until keg conditioning. I was recently at Right Proper brewing a collaborative smoked, juniper-infused, Norwegian farmhouse ale with Modern Times! More on that batch later...

Sodium chloride is sodium chloride, but there is nothing wrong with a story. I grew up spending summers on Cape Cod (where I still have a crate of Cranberry-Orange mead buried). Originally I’d planned to make the trip to collect bay water to dose in for salinity… but the timing didn’t work out. I had a jar of smoked sea salt from Wellfleet from my mother, close enough! Between the low dosage and low smoke-intensity I wasn’t expecting a perceptible smoke character in the beer, but sub-threshold complexity can’t hurt.

Appearance – Cloudy golden yellow. White head disperses rapidly. Not intentional, but it could pass for a NEIPA (other than the poor head retention).

Taste – Zippy lactic acidity, without the funkiness of Brett. Lots of bright fresh citrus, especially lemon (without being artificial or furniture polish). The finish has a little no-boil grainy-wortiness that I don’t mind, but it may not be for everyone. Maltiness from the Munich isn't as pronounced as I expected.

Mouthfeel – Slightly fuller than the classic versions thanks to the oats.

Drinkability & Notes – The best gose I've brewed! Refreshing and unique. The citrus from the coriander is outstanding! Sulfur aroma is the only detractor.

Changes for Next Time – Seems like this mixed culture really benefits the warmer fermentation temperature. The acidity hit its mark with extra time, but the fermentation wasn't vigorous enough to blow-off the sulfur. With the maltier grist the no-boil flavor was more assertive when young than similar all Pils/wheat beers that I've brewed - I might go for a 60 minute boil. 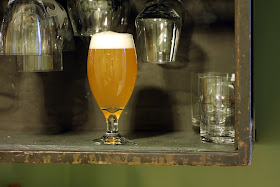 Notes
-------
Recipe adjusted so this can be brewed as a single batch.

Ran off 5.5 gallons of 1.041 wort once the wort hit 180F. No hops or whirlfloc. Chilled to 95F with the plate chiller. Added .5 oz of crushed Indian coriander to the wort. Pitched Right Proper house culture, woken up with 1 L of wort 24 hours prior. Added 2 tsp of lactic acid to lower pH to 4.5. Left at 70F to ferment.

I get a commission if you click the links to MoreBeer/Amazon and buy something!
The Mad Fermentationist (Mike) at 7:55 PM