When I set out to visit Commonwealth Brewing Co. in Virginia Beach to collaborate on a sour brown, I tossed a sanitized carboy in the trunk. I brought home three gallons of wort and pitched my own microbes (Omega Lacto Blend and bottle dregs) in addition to their house ale yeast.

With all of the effort many brewers put into wort production for sour beers, I thought it was worth noting how little my "version" has in common with the wort that stayed at Commonwealth. Especially for sour beers, so much of the final character is dependent on the microbes, barrels, blending, and in this case (lack of) fruit! I'm not saying wort production is irrelevant, but getting the right fermentation is much more important than whether the beer is 10% or 20% wheat! 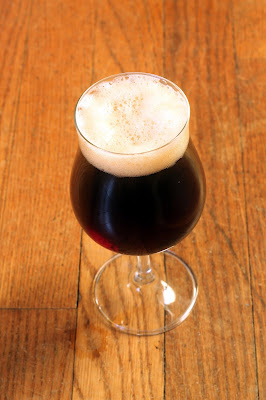 There are still a few bottles of both variants (Penthesilia and Hippolyta) available at the brewery's tasting room if you want to taste the beer (or steal the microbes)!

Mouthfeel – Light without being tannic or desiccant. I like a bit more heft.

Drinkability & Notes – Not hugely interesting, but a pleasantly drinkable dark sour that showcases a variety of classic Brett funk with balancing acidity.

Changes for Next Time – Shouldn’t come as much surprise, but I think this is a good illustration of why trying to “clone” commercial sour beers is a fool’s errand. Even with literally identical wort you can't do it without the other pieces of the process!

Given the less-than-exciting trajectory of this batch as it approached packaging, I diverted a gallon to try a coffee-infused version. I know, listening to the so-called expert of American Sour Beers this might seem like a bad idea:

“The bold coffee and chocolate additions that work so well in big sweet stouts do not succeed when combined with a dry and sour base.”

My opinion softened after I split a glass of Lervig Café Sur, a unique sour pale with coffee while in Norway. I only risked a gallon, adding .5 oz of uncrushed Ceremony Thesis coffee beans (the same I used for this Hoppy Blonde) for less than a day… 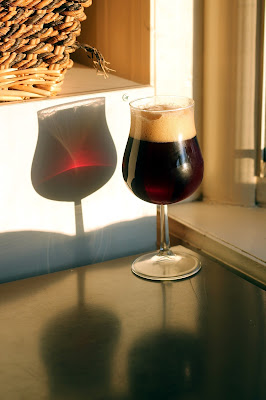 Smell – The coffee adds a fresh toasty-roasty aroma that combines with the fruitiness, covering the majority of the funk (leaving just a bit of dust). Slight “green bell pepper” of oxidized coffee, it has faded from where it was a few months ago.

Appearance – Some light really brings out the red! Head retention is slightly less, but that may be thanks more to reusing the glass rather than the coffee beans.

Taste – The coffee is a good match for this beer, although they aren’t a fresh as I would have liked. It reduces the perception of the Brett. Acidity is similar. Coffee would be a waste of a more interesting base beer. I'd put it in the same category as dry hops for a sour, not what I would add to my favorite base beer.

Mouthfeel – Similar to the straight version.

Drinkability & Notes – The coffee adds some interest to what is an otherwise unremarkable base beer. This isn't exactly the right combination, but it is something I'll experiment more with in the future.

Changes for Next Time – A paler base beer might work better given the additive power of the dark malts and beans. Alternatively, a coffee with more dark fruit might have been a better match for a dark sour.
The Mad Fermentationist (Mike) at 6:29 PM