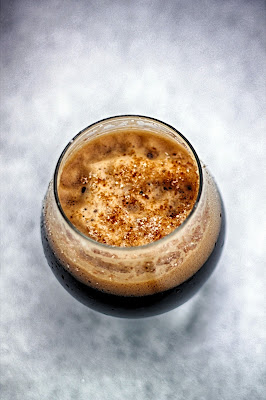 The continuation of my Christmas eve tradition of drinking homebrewed Courage Russian Imperial Stout was beginning to look in doubt. After 2015 I was down to three bottles, so February 2016 I rebrewed a tweaked 10 gallon batch (recipe). Originally the plan was to give half the wort to my friend Scott, but when his plans changed at the last minute I split the batch with myself instead: half clean, half with White Labs Brett claussenii and oak spheres.

The funky-oaky half is ready to bottle this week. As with the original batch from 2007, once the gravity reached 1.020 I transferred the beer to a clean fermentor with one campden tablet (sodium metabisulfite) per gallon. This additional 20% apparent attenuation from Brett isn't guaranteed. Mike Karnowski, the brewer/founder of Zebulon Artisan Ales (and author of Homebrew Beyond the Basics), homebrewed a similar recipe a couple years ago and split it between five commercial Brett strains, but didn't see significant attenuation from any of them (not a bad thing) - I got to taste a sample of each at a bottle share while I was in town for the Asheville Homebrewers Conference!

Smell – Expressive clean roasted nose. Charred cocoa, fresh bready malt, a hint of ethanol. There is a subtle dark fruitiness from the candi syrup, but not nearly the intense-raisin that many year-old dark-crystal-malt dependent imperial stouts fall. No noticeable oxidation. No hop aroma, unsurprising given the single early Columbus addition.

Appearance – Beautiful, opaque, black body. Voluminous mocha head (bigger than I like to see on what should be a low-carbed beer). Great retention despite the snow landing on it. 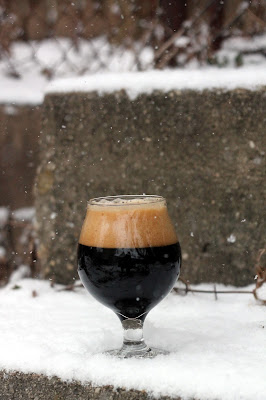 Taste – Flavor is a delicious blend of 85% cocoa chocolate bar, richly toasted malt, and subtle English ale fruitiness. Enough bitterness (hop, roast, alcohol) to balance the plum-sweetness in the mid-palate. It doesn’t taste like a 1.040 FG beer, but then it may grow sweeter as the bitterness drops off with time.

Mouthfeel – Thick, coating, rich. Carbonation is elevated from my preference (and the 2.1 volumes I targeted), but I wouldn’t call it over-carbonated in general beer terms.

Drinkability & Notes – Surprisingly drinkable for a beer this big in alcohol and sweetness. It maintains a fresh malt flavor from the Maris Otter and amber malts that plays off the firm Black Patent roast wonderfully. Without Brett the malt is much more in focus.

Changes for Next Time – This is it for me other than the carbonation (which is easy enough to swirl out). As big as it needs to be, with an intense maltiness that I don't think would be possible in a smaller stout. At 9% a 12 oz bottle is a reasonable serving, something I can't say for the many commercial stouts that don't achieve this flavor-saturation with 12-16% ABV!

Hopefully the next few years are kind to the remaining case and a half!

I drank my third-to-last bottle of the original on Christmas eve. Not much had changed since last year so it didn't seem worth writing up the full tasting notes. Carbonation was still pleasantly low, big dark fruit, gentle funkiness, no sign of impending oxidized-doom for the last couple bottles! 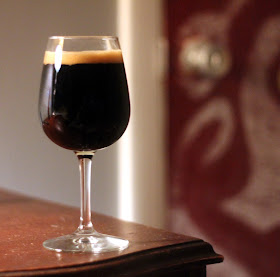 The Mad Fermentationist (Mike) at 5:39 PM