I needed an accompaniment to my milkshake IPA, so why not a smoothie sour (recipe)? I’m always trying to discover new ways to turn 10 gallons of wort into two completely different beers. In this case it was by pulling five gallons before adding the bittering hops.

The un-hopped wort started with a terrifically quick acidification thanks to Omega Lacto Blend, followed by primary fermentation with 12 strains of Brett courtesy of East Coast Yeast Dirty Dozen (no brewer’s yeast was harmed in the making of this beer). After those two fermentations I loaded apricot puree and then plenty of Citra and Amarillo into the fermentor. Something like Cantillon Fou’ Foune meets Kern River Citra Double IPA!

Sour beers often have fizzy head retention, but I did everything I could to promote stable foam for this batch: adding CaraPils and wheat flour to the mash and pre-acidifying the wort to a pH of 4.4 to inhibit protein breakdown by the Lactobacillus. 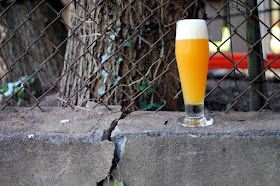 Appearance – Looks like an apricot smoothie in the best possible way. Glowing peachy-apricot body with a sturdy white head. Probably the best retention I’ve been able to produce on a sour beer!

Smell – There is a big fresh and dried apricot aromatics, with just a touch of the Amarillo fruitiness carrying through. With four ounces of dry hops serving as an accent, you can get an idea of how intense the fruit is! Minimal Brett character, but there is a slight toasty/earthy character I’ll give it credit for. The hops, especially the dankness of the Citra, come through more as I approach the bottom of the glass.

Taste – While several million years of primate evolution suggest that fruity aroma will translate to sweetness, there isn’t much to be found. The juicy apricot carries through beautifully, but the sugar is gone, replaced by big acidity. Very lactic, bright, and sharp. Coats the mouth is a slurry of fruit, hops, and acid. A loud beer, all the flavors are turned up more than would work were each alone, but in concert they synergize surprisingly well!

Mouthfeel – Light and lively, but not tannic or thin. While there is plenty of acidity from the quick Lactobacillus fermentation, I didn’t allow the Brett enough time to break down the dextrins.

Drinkability & Notes – Not a beer that excels at subtlety, but damn if I don’t keep going back for another sip. Not as good as either the Cantillon or Kern River alone, but I’m sure it’s better than dumping them together 50/50! Next time I would dial back the acidity and apricot respectively to increase the drinkable and allow the hops/Brett to shine through. This is a base beer (co-pitching the Lacto and Brett) that I’ll likely come back to with other flavor combinations!
The Mad Fermentationist (Mike) at 7:17 PM