For most of my first nine years homebrewing I produced wort with the standard "American" process. I mashed in a five gallon cooler fitted with a homemade copper manifold, recirculated by hand, manually fly/batch sparged, and chilled with an immersion chiller. It is a process (detailed here) that is simple, reliable, hands-on, and which makes good beer. My equipment was starting to show its age and I wanted to move to 10 gallon batches anyway, so about a year ago I began researching the alternative methods and options out there.

There are many aspects you can prioritize when deciding how to brew: cost, efficiency, time, effort, control, quality, quantity, repeatability etc. You can’t pick all of them though! There are $2000 kit that automatically brew a couple gallons at a time with high repeatability. There are $200 system that brew beer that takes a day of manual labor. The system attributes I wanted to focus on were maximizing quality while minimizing effort. I was fine spending a bit of money on the setup, clearly brewing is something I’m hooked on. I was fine sacrificing some system efficiency for reduced effort. I also don’t mind longer brew days, if it’s time I don’t have to do anything!

What I ended up with is a method I’m calling “minimal sparge.” Compared to my old rig, the new system requires less time/effort/equipment, while producing more consistent wort. Compared to Brew in a Bag (BIAB), it produces cleaner wort (thanks to automated recirculation), and avoids the hassle of hoisting the hot grain bag out of the kettle. In exchange it requires more equipment, a separate kettle and mash tun plus a pump. Minimal sparge avoids the monitoring (temperature, pH, and gravity) required for fly sparging and the second/third vorlauf for batch sparging, while improving on the efficiency of traditional no-sparge.

Minimal Sparge Process
Step 1 - Place the false bottom in the mash tun and fill with 85% of the water required for the batch (16-17 gallons for an 11-12 gallon batch). Treat with minerals and acid as desired while heating to the target strike temperature. 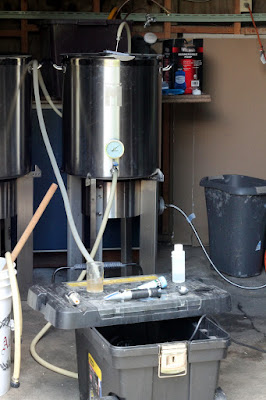 Step 3 - Adjust pH as needed. I aim for ~5.5 for most beers, slightly higher pH than traditional. With so much water diluting the buffering powers of the malt it takes a lot of acid to drop the pH to the "ideal" low end of the range. This can result in an overly acidic tasting finished beer, especially if you have water with high residual alkalinity.

Step 4 - Once the mash converts (I usually wait 30 minutes) turn on the pump for 10-15 more minutes until there aren’t any large chunks of husk in the wort. With the thin mash conversion can take slightly longer than usual, but 60 minutes is still overkill unless you are using a large percentage of unmalted adjuncts. 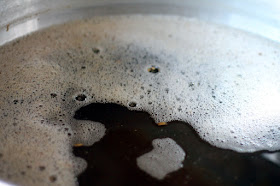 Step 5 - Move the output from recirculating back into the mash tun over to the boil kettle. Start the burner on the kettle once you have a gallon in there. 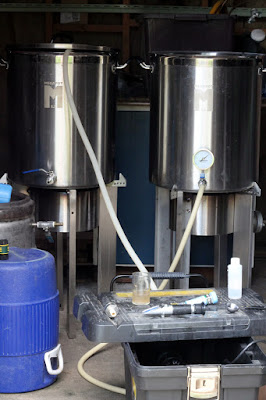 Step 6 - When the top of the grain bed is visible, stop the pump and add the remaining 15% of the water (I use untreated directly from the hose/filter or RO/distilled). Continue runoff until you reach your target pre-boil volume. 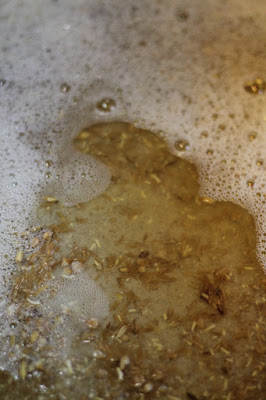 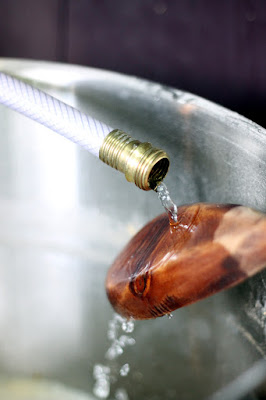 That's it as far as this method is truly concerned, but here are my last few steps as they stand.

Step 7 - Boil, adding hops, sugars, spices etc. as desired. I bag my hops to make it easier to deal with draining the wort later. 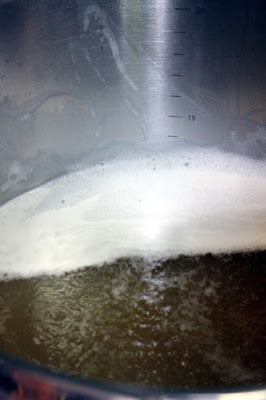 Step 8 - Chill, I’m enjoying the switch to a recirculating immersion chiller. It isn’t quite as quick as the plate chiller I used for the first few months with this system, but it is so much less effort to clean (and makes it easier to use my submersible ice water pump for summertime chilling). I run the recirculation for a few minutes first to sanitize the lines/pump before I turn on the water.

Step 9 - Allow the chilled wort to settle for 15-20 minutes. I don’t think trub causes any issues for the beer (Brulosophy Trub Experiment), but clearer wort means more beer out of the same fermentor and purer yeast to harvest. Draw off the clear wort from the side pickup. I start the boil with the pickup pointing slightly upward, and push it down with a sanitized thermometer tip near the end of the runoff.

Results
So far I’m happy with the the beer and the brew days. If I’m on my game (i.e., brewing solo in the morning) I can go from collecting water to cleaned-up, with 11 gallons of beer in the fermentors in four to five hours. Despite that relatively short time, the ease of the system provides plenty of time for what I think are the important aspects of brewing: evaluating ingredients, monitoring pH, preparing the yeast, sanitizing fermentors etc. Brew day shouldn’t be stressful, especially if the extra running around and monitoring doesn’t improve the quality of the beer!

General Thoughts
I think that the best fly or batch sparging can hope to do is approximate no/minimal sparge with higher efficiency. More aggressive sparging comes with the risk of extracting unwanted tannins/polyphenols. On a homebrew scale that risk/effort isn’t worth the savings a couple pounds of grain! With this system my efficiency is consistently 72-75%, even a little better than what I often got with more intensive sparing methods!

The cold-water sparge was inspired by Kai’s look into the technique. Essentially he found that while it slows runoff, it doesn’t hurt efficiency compared to traditional hot sparging. From a practical standpoint it means that I don’t need a separate hot liquor tank. I’m not in a huge hurry during the sparge because the wort is still coming to a boil anyway. As an added benefit the cold water cools the grain bed as it flows through, making it easier to dispose of the spent grain during the boil.

I’ve found that it helps (on any system) to make slightly oversized batches so you don’t have to get every drop of wort out of the mash tun and kettle. I use enough water to get 14.5 gallons to the kettle when I only need 13.5. That is enough to have 12 gallon at the end of the boil, which allows me to get 11-11.5 gallons of wort into the fermentors which in turn yields two full five gallon kegs without having to tilt the fermentor and risk disturbing the yeast cake. Sure this means using a little extra of everything, but it is worth it for me.

You can construct a similar system with gear from a wide variety of manufacturers, but here is what I use:

(I get a small kickback on the Amazon links at no extra cost to you, even if you order something I didn't link to - pretty sweet deal for both of us!)
The Mad Fermentationist (Mike) at 8:02 PM