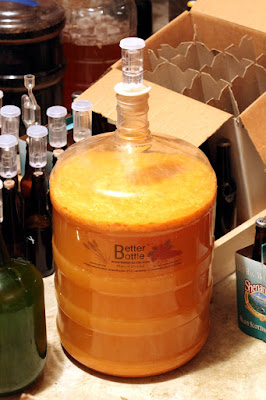 As fun as it is to talk about being inspired by astrophysics, architecture, travel, and art (Nathan's dry hopped tripel inspired by Gauguin's paintings of Tahiti) the best beer ideas usually come from drinking delicious beers! The flavor concept for this batch came from a homebrewed Citra apricot sour saison that a fan (thanks Aaron!) sent me last year.

I’ve combined fruity hops and actual fruit a few times (e.g., grapefruit, Cascade, and Chinook, papaya and Citra) but never in a sour beer. With so much being added to the aroma, I didn’t want to waste the time it takes to achieve a perfectly-balanced subtly-funky mixed-fermentation sour. So I opted for a quick souring method (went on tap less than two months after brew day).

I diverted 5 gallons of wort from my Northeast IPA recipe prior to adding any bittering hops. I opted for 100% Lactobacillus followed by a big pitch of Brettanomyces. The acidity came form a package of Omega’s Lacto Blend that founder Lance Shaner sent to me a few months prior. All I can say is “wow!” I knocked out warm, and left the wort at 80F and within 24 hours the pH was already down to 3.3! The risk with a strain this aggressive is that you can over-sour if you don't monitor closely. Rather than pasteurize the wort, I simply cooled it slightly and pitched a starter of East Coast Yeast Dirty Dozen (a blend of 12 Brett strains) that Al had sent.

Lance (who also broke the Brett Trois isn’t Brett news) has been making waves recently by claiming that Lactobacillus cultures from some labs have a not-insignificant yeast population. I’ve heard similar things from several skilled microscope-wielders over the last couple years. Once purified, Lance found that none of the Lactobacillus cultures achieved more than 11% apparent attenuation. He contends that complete attenuation (as I achieved in my 100% Lacto batch) indicates the presence of yeast (full attenuation with Lacto would necessitate production of an undrinkable amount of lactic acid - which I clearly did not achieve).

I’ve been listening to The Sour Hour, and heard Cory King from Side Project (episode 3) and Tim Clifford from Sante Adairius (episode 5) both use apricot puree for Abricot Du Fermier and West Ashley respectively (as does host Jay Goodwin for Rare Barrel's Map of the Sun). All three use (loads) of Oregon Fruit Products, but I went with three 49 oz cans of Vintner’s Harvest (9.25 lbs of fruit added to 4 gallons of beer). I hadn’t used commercial fruit puree in more than eight years years because of how painful it was to separate from the beer without losing 20% of the batch. Sad to say, my opinion isn’t changing after this batch. On a homebrew-scale, it is just so much easier to transfer off of whole or sliced fruit (which makes up for the additional work of getting the fruit into the beer). Luckily the flavor from the puree is really nice!

I waited for the fermentation on the fruit to calm down, then added two ounces each of Amarillo and Citra. It’s the same fruity combination we use for the Modern Times Fortunate Island recipe (as does Kern River for their Citra DIPA). The brightness of the Amarillo tempers Citra, which can become dank on its own. That's an IPA-level dry hopping rate, but with so much fruit it was necessary to get it to come through at all! Oddly (and thankfully), dry hopping tempers the perception of acidity for me.

The result is an intensely sour and fruit-forward beer in relatively short order. If you don’t have Dirty Dozen, something like 3711 French Saison would work well. The extra gallon of the base beer is currently sitting on the interiors from two passionfruits; no dry hops planned! 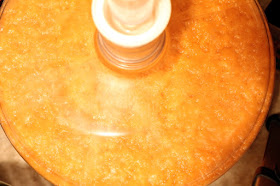 Note: this recipe was actually double everything listed, half was run off after 30 minutes for souring.

Mash was 3 gallons of distilled, plus 4.25 filtered DC tap. 2 tsp of 10% phosphoric acid. 6 g each CaCl and Gypsum. Mash pH = 5.33 after 5 minutes of recirculation. 1 gallon of distilled added as a cold sparge. 120 PPM chloride and 140 PPM sulfate, including mash and sparge water.

7/7/15 Added 2 oz each Citra and Amarillo loose to the sour/apricot portion. Flushed head space with CO2, left at 65 F.

7/22/15 Added the meat from two passion fruits to the one gallon of remaining non-fruited beer.

8/11/15 Tasting of the apricot dry-hopped version. Wow, big acid, fruit, and fresh hoppiness. The apricot turned the sourness up more than than I expected.

10/27/15 Tasting notes for the passion fruit version. Could have added more, but it is refreshing and pleasant as is.
The Mad Fermentationist (Mike) at 8:14 PM