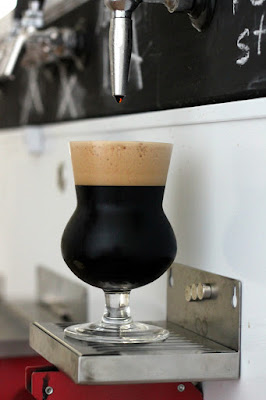 After six months, I’m pretty happy with my stout faucet and beer gas setup on the new kegerator. The only two exceptions are that the first tank of beer gas kicked before I served an entire keg; most likely that was the result of a regulator leak. I gave each of the fittings a turn and so far so good with the second tank. My other complaint is the dripping from the faucet, the small reservoir above the restrictor plate holds about a teaspoon of beer that slowly drips out over half an hour following each pour. Otherwise it pours a beautiful beer!

This Meadowfoam Honey Oatmeal Stout (recipe) is the second beer through after my Vanilla-Coconut Milk Stout. I’m thinking of brewing a Chocolate Pumpkin Porter next for the fall…!

Smell – High-quality chocolate bar, fresh toasty graininess. A hint of Raisin Bran. Also a touch of vanilla/floral, which I’ll generously attribute to the honey. Not a loud aroma, mostly thanks to the nitro (low carbonation means fewer CO2 bubbles to carry volatiles up to your nose).

Taste – Smooth cocoa roast, toasty, malty. More semi-sweet than dark chocolate. I can talk myself into tasting a hint of vanilla, but the honey is mostly a letdown. A hint of charcoal in the finish. Low bitterness, with plenty of sweetness, but it isn’t nearly as sticky as the milk stout.

Mouthfeel – I really like the thistle glass for nitro (I bought this one from Cristal Blumenau during our Brazil trip). Rather than allow the foam to float up out of the way with each sip (like a pint glass) it funnels the foam towards your mouth. Getting a bit of the head with each sip really enhances the creamy impression. Faint residual carbonation, tastes like maybe 1.2-1.4 volumes.

Drinkability & Notes – A nice stout, despite the July heat. The honey doesn’t come through as distinctly as I would have liked, but it adds depth to the chocolate. The raw honey itself wasn’t as punchy as the Meadowfoam honey that Ken Schramm passed around at NHC 2014, which is likely part of the problem. Next time I’d up the amount to two pounds, and try a different supplier.

The Mad Fermentationist (Mike) at 7:07 PM