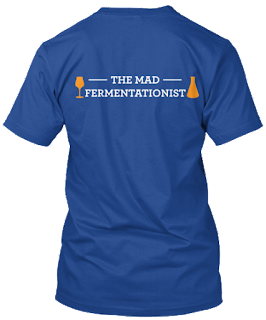 For my first few years of this blog, I didn't make a dime from The Mad Fermentationist. Since then I've generated some beer money with ads for Brew Your Own, and American Sour Beers. I generally treat the blog more like a hobby (writing what I want/when interests me), but despite my efforts with social media, the book, and magazine articles the blog is still the most important connection to all of you. No plans to stop anytime soon!

While I was hanging out in the White Labs Tasting Room last month with James, Steve, and Andy (of Basic Brewing) before the start of the National Homebrewers conference, we ran into Marshall Schott and a few of the other guys from Brulosophy. They invited me to participate in two of their experiments: Fermentation Temperature and First Wort Hopping. I was impressed by how well brewed the beers were, and found both triangle tests to be really challenging (I was one for two - and probably not on the one you'd assume). During the Grand Banquet, we got to talking about blogging and branding, and Marshall suggested I talk to a designer he knows.

Tyler Schmidt and I emailed back-and-forth 20 times over a couple weeks, me providing ideas/concepts/suggestions, and him sending back sketches and samples. I was really happy with the two resulting logos! I thought it would be nice to have some t-shirts printed up for myself (and anyone else who wants to buy one). I’m doing it through Teespring, which was another suggestion from Marshall. If you’re interested, follow this link and reserve a shirt. Once sales ends in two weeks, the company will print all of the shirts and mail you yours. I get a few dollars for each shirt sold, and you get a cool shirt (and the knowledge that you helped support the blog)!

If you’re in the DC area you can save on shipping and pick-up your shirt from me at the August or September DC Homebrewers club meeting. I’ll make sure to bring a few fun sour beers to share at those meetings as well! Exact meeting dates/locations aren’t announced until closer to the date, so sign up for the email list.

Thanks for all the support, comments, and emails over the years! I wouldn’t have kept writing if I didn’t have so many positive experiences come out of it.

The Mad Fermentationist (Mike) at 7:41 PM