Homebrewing is a hobby that always has a shiny new piece of gear to buy with your beer money. Now that I make a little bit of money from the hobby (between writing, consulting, hocking t-shirts, and Amazon Associate Links like those below) I get to write-off what I spend. This forces me to actually track my spending more closely than I did when I was brewing purely for the love of the beer. It also means I sometimes get some ingredients or equipment for free that I wouldn't have otherwise purchased.

Here’s a list of nine things that I don’t think have provided a good ROI (return on investment) - or wouldn't had I purchased them. I’m certain a few of you will disagree with every one of the items on the list. If I'm missing some big advantage, an alternate use, or if they've improved, let me know! Also, feel free to post a comment if you’ve got anything that you’ve been disappointed with, save the rest of us a few (hundred) dollars! 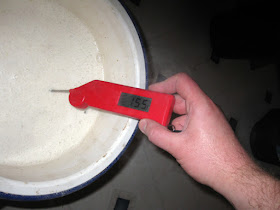 1. Thermoworks Thermapen ($96.00): A fast/accurate digital thermometer certainly isn’t the worst thing to spend your money on, but an upgrade of a couple seconds or a few tenths of a degree doesn’t justify five times the price! My Thermapen lasted for only two years before a wire broke and it stopped working. Even before that the swivel started to become a bit sticky. I’ve had much better luck with Thermowork’s Super-Fast® Pocket Thermometer. Compare its specs (5-6 second readings, ±0.9˚F/±0.5˚C) to the Thermapen (3 second readings, ±0.7°F/±0.4°C), not bad for less than 20% of the price! Without moving parts the Pocket is also less prone to breaking, mine is going strong after nearly five years of double duty brewing and cooking (my circa 2008 Thermapen wasn’t waterproof like the new ones, so they may now better handle the rigors of sticky wort). 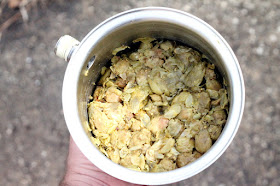 2. HopRocket ($124.99): When we started developing the hoppy beers for Modern Times, Jacob bought me a Blichmann HopRocket to better replicate the character they’d get getting with a hop-back at the brewery. Three years later we’ve independently come to the same conclusion: hop-backs generally aren't worth the hassle! I never got much character out of the hops compared to whirlpool (hop-stand) and dry hopping. I stopped using mine after trying it without dry hops. At the brewery they’ve found they get a better character from moving the hop-back additions elsewhere. My chilling process is much easier now that I can simply recirculate hot wort through the plate chiller to sanitize, rather than filling and draining Star-San. 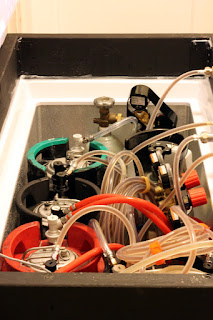 3. 5 lb CO2 tank ($65.00): If you have enough room, there is no reason not to get a bigger CO2 tank. CO2 prices aren’t linear like propane or gasoline, it is really the activity of filling that comprises most of the price. A 20 lb CO2 tank often costs only a only few dollars more to fill or swap than a 5 lb tank. It’s also nice to have  extra CO2 because one of the biggest pains of owning a kegerator is getting to the gas supplier during their limited hours. I kept my original 5 lb aluminum tank for flushing carboys/growlers, and mobile dispensing.

4. Ultra Barrier Silver™ Antimicrobial and PVC Free Beer Tubing (~$3.00/ft): This high-end beer line doesn’t seem to be any more impermeable than standard tap lines. I had a keg of carbonated water on that I could taste the pine and citrus that were in the beer I ran through the line previously (despite cleaning and sanitizing with alkaline brewery wash and Star-San). Beer line cleaner removed the flavor, but if I have to use it between each batch I don't see the advantage compared to standard tubing at less than 1/3 the price!

5. Brewery-Specific Cleaners ($12.99): In most cases, Oxiclean Free will do the same job for half the price of PBW. Nice to have something a bit stronger around for when you need it, but in most cases a long soak in hot water and Oxiclean gets rid of fermentation crud. Beer line cleaner is a stronger option for really tough jobs if you don’t mind the extra precautions necessary when working with caustic. I’ve been disappointed in the keg/growler tabs from Craft Meister, it takes them so long to dissolve even with agitation that the water cools off significantly by the time they are fully dissolved (their powdered cleaners seem fine if unremarkable – although I don't like the packaging).

6. Overpriced homebrew store ingredients: There are plenty of ingredients at your local homebrewing store that are over-priced compared to a readily available alternative. If you want to dry out a strong/pale beer like a tripel or double IPA skip the clear candi sugar or dextrose and add some table sugar. Avoid the over-priced "brewing" spices sold and visit an ethnic market (Latin, Indian, or Asian especially) or a specialty spice shop. Prices will be lower, and more importantly quality/freshness will be better. Same goes for pricey fruit purees, they are easy to add, but painful to separate from the finished beer. 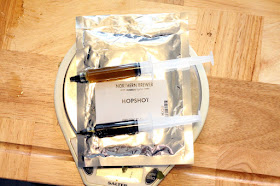 7. HopShot ($3.99): So many delicious IPAs are bittered with hop extract. On a commercial scale, compared to "actual" hops, extract is less expensive, more consistent, and increases yield. Virtually all of the beers brewed on Modern Times' 30 bbl system receive a can or two of hop extract at the start of the boil. Russian River, Hill Farmstead, Stone, Tired Hands etc. all use hop extract for at least some of their beers. I've had good results with Northern Brewer's HopShots a few times. However, I found that the packaging wasn't consistent. Some syringes contained a fresh smelling golden serum (top). while others were murky brown and smelled oxidized (bottom). The "dark" syringes also tend to leave small "tar balls" in the hot break and stuck to the sides of the kettle. Someone needs to improve on hop extract for homebrewers! 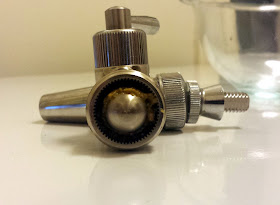 8. Perlick 650SS Flow Control Faucet ($54.50): When I upgraded my kegerator earlier this year, I bought a couple flow-control taps to allow me to serve highly carbonated beers without excess foaming (I hoped). The problem is that the Perlicks clog very easily compared to standard Perlicks. The lever mechanism, even when fully open, creates such a small gap that any hop particulate or fruit pulp becomes lodged (requiring disassembly and cleaning). Nathan had similar complaints for the ones they use at Right Proper, but also mentioned they'd gotten them replaced with a newer model that doesn't have the same issue. Although, even when they aren't jammed the pour doesn't seem to be any smoother than the standard Perlicks. 650SS are also not recommended for sour beers anyway...

9. Glass Carboy ($27.05): Glass has the unfortunate ability to shatter without a warning dent. The shards themselves can cause serious injury (to both beers and human flesh). I still have a couple glass carboys that I use as a last resort, but I'll never buy more if/when they break. I've had good luck with 8 gallon wine buckets and now Speidel 30L fermentors for primary fermentation (it is nice to not worry about blow-off 98% of the time), and kegs and plastic carboys for long term storage.

Bonus! Oak barrels: This one might surprise many of you, but I think most homebrewers would be best served skipping oak barrels. They are expensive, unwieldy, and prone to leaking, oxidation, and mold. If you want oak character, add oak cubes. If you want spirit or wine character, blend your favorite commercial example into the fermented beer. Sure barrels are pretty and they can be a great excuse for a group project, but on average I haven't found the beers I've aged in them to be significantly better than those aged in carboys or kegs. When the barrels and technique are on, they do have another level of character that can't be matched, but those are few and far between.

Advice
If you want to make brewing more affordable, focus on items that allow you to buy malt and hops in bulk (grain mill, vacuum packer, etc.). Buy gear that will last , rather than items that will need to be replaced. They may be more expensive initially, but better to get something that will last 20 years, rather than saving 50% for something that will need to be replaced in five years.
The Mad Fermentationist (Mike) at 7:50 PM