There are flavors that just naturally work together. It’s no real challenge to add sour cherries to a sour brown, or coffee to a porter (although it can take skill to get these combinations to really sing). However, there are other combinations that take work to make even palatable. Belgian IPA falls into that category for me. Too often the phenolic yeast and citrusy American hops clash, or one gets in the way of the other. Too much bitterness with a really low FG or so much hop aroma the yeast is lost completely. There are examples that prove it is possible (e.g., Anchorage Galaxy IPA, Selkirk Infidel), but it has never been a "style" that I go out of my way to sample.

Rather than take an IPA recipe and swap out the American/English strain for an abbey, I started with a standard wit with WY3711 French Saison (which worked previously) and blasted it with late-boil and dry hopping. I went with a blend of hops (Citra, Mosaic, and Simcoe) that I used previously in Simcoe & Sons Pale Ale, which was fermented with Conan. I allowed the wit to cool uncovered for about 40 minutes before adding the hop stand addition. The lower temperature is supposed to preserve some of the more volatile hop oils (and avoid additional IBUs), however I was underwhelmed with the hop character before dry hopping.

In addition to the character of the yeast, I counted on the subtle spicing with the classic duo of coriander and orange peel to bridge the gap from hops to yeast. Each contains compounds that are also derived from American hops (like citronellol and linalool). I prefer the Fruit Pebbles character of Indian coriander (as I’ve talked about previously), rather than the standard supermarket variety. Rather than fresh zest, I added sweet dried orange peel from Penzey’s in place of the pithy bitter Curaçao variety usually sold for brewing (and added to many classic Belgian wits).

I may have gone overboard with the mash acidification. As I refine my mini-cold-sparge process on my new brew house I’m struggling to figure out what mash pH to target. I add about 90% of my water at the start of the mash, so if I target ~5.2 pH as I would in a more conventional setup it requires much more acid (owing to the more dilute mash). The result is a noticeable acidity in this batch. It actually works well here thanks to the low bitterness and citrusy flavors, but would be a disaster in a pale lager or even an IPA. 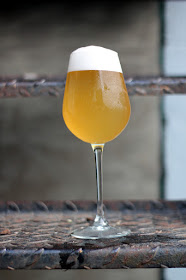 Appearance – One advantage of bottling beers that you intend to serve yeasty is that you can always roll to resuspend the correct amount of yeast. Stored cold in a keg and most strains drop out after a few weeks. When I went to take a photo for this batch yesterday there was less beer and more yeast in the keg than I realized before I rocked it; instead of a slightly milky haze, I got a glass full of trub… Take two is much prettier with 24 hours to settle. Could be whiter (if I’d used Pilsner malt), but the head is rocky and substantial.

Smell – Citrus and stone fruit. The hops, yeast, and spices play a three-part harmony. No sharp edges. The hops have mellowed a bit, allowing the “wit-iness” of the beer (doughy wheat and yeasty spice) to display a bit more prominently. When it was fresh the aroma was IPA-forward. Still fresh, but mellowed.

Taste – Bright. I wouldn’t even call it tart, but the acidity adds a quenching/refreshing quality that is near perfect on a 100F day like today. The American hops provide a mixture of apricot and grapefruit. Retro-olfactory is the most prominent spot for the coriander and orange peel. The French saison strain mostly stays out of the flavor, adding to the citrus and enhancing the general “Belgian” leaning balance. Bitterness is mild.

Mouthfeel – Medium bodied, the proteins from all that wheat add some heft as does the texture of the yeast. Firm carbonation, but it is not as spritzy as the style can be.

Drinkability & Notes – Wit is one of my favorite styles for augmentation because the base is mild without being too crisp or clean. Add this hoppy combination to the list of those that work. It is always a good sign that I’m surprised that a keg is about to run out (compared to the ones that end up feeling like I somehow squeezed 7 gallons into a 5 gallon Corny). Might have to brew another batch of wit before the summer is done!

Added 1 oz each Citra, Mosaic, and Simcoe to steep for 20 minutes.

Ran off 5.5 gallons @ 66F and pitched remains from a one gallon saison experiment. Left at 65F ambient to ferment.

4/9/15 Dry hopped with 1 oz each Citra, Mosaic, and Simcoe. Allowed to warm to 70F to complete fermentation.