Inspired by my research into hop glycosides and yeast biotransformation for the July/August issue of Brew Your Own (subscribe here), I brewed an American IPA that showed off yeast-hop interaction. I love the aroma of raw right-from-the-bag hops, but I prefer a base of softer less-green/grassy aromatics. The science is a bit dry, but some yeast strains have the ability to free aromatics and convert certain compounds into more interestingly aromatic ones. From a sensory perspective, the result is a weaker aroma ounce for ounce of hops (requiring a higher hopping rate), but much juicier perception.

The North East has really been killing hoppy beers the last few years. Alchemist and Hill Farmstead started the trend, but newer breweries brewing wonderfully hoppy things include: Trillium, Tree House, Tired Hands, Other Half, and Fiddlehead. What unites them is a bit more yeast character than indistinct Cal/American ale, a wonderfully juicy/fruity/saturated aroma, soft mouthfeel, balanced bitterness, and less than spectacular clarity. A big change from what East Coast IPA meant five years ago: a malty IPA somewhere between American and English IPA.

For yeast, I selected Wyeast 1318 London III (alleged to be from Boddington’s). Not exactly the first strain you’d think of for an American IPA, but my friend Sean had good luck with it and it has been rumored to be the house strain at a hop-specialist brewery. If you are fermenting with WY1318, make sure you use a blow-off; I had never had to worry about 5.5 gallons of mid-gravity beer in an 8 gallon fermentor before!

I included flaked corn (because I had it sitting around) and wheat in the mash. These two adjuncts work counter, with the corn diluting the protein content of the wort while the wheat increases it. I’d read (somewhere) that the proteins in wheat flour are especially foam-positive even compared to flaked wheat, so I wanted to give it a try. I mixed the flour into the milled grain to distribute it, but even at this relatively low amount (half a pound in 10 gallons) the lauter was slower than I’m accustomed to.

The end of the boil brought on big dose of hops (Galaxy and Simcoe), allowing them to steep in the hot wort before chilling. The more hops added to the beer on the hot-side, the more of their water-soluble compounds (like glycosides) the yeast will be able to interact with. I added the first dose of dry hops midway through fermentation, again to allow more yeast-hop interactions. As a side-note, always smell each bag of hops before adding them to the beer; I had to throw away an ounce of Galaxy while brewing and dry hopping because they smelled less than fresh compared to the other packets.

The second half of this batch (pulled before the bittering hops) is well on its way to being an apricot sour – but more about that next week! 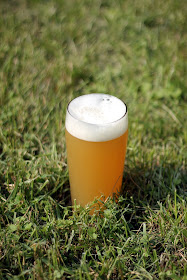 Appearance – The draft pour is more hefeweizen or wit than IPA (even extra-hoppy IPA). Translucent peach, I can barely make out my fingers on the opposite side of the glass. Cloudy/hazy side of muddy, but just barely (and this is after a few weeks in the keg!). A few flecks of hop matter in suspension. Pillowy white head, with unremarkable retention.

Smell – Juicy hops, mission accomplished! The Simcoe in the keg provides some hints of resiny pine, but the overwhelming impression is that of freshly squeezed grapefruit and mango. Everything a hoppy beer ought to be: bright, fresh, and vibrant. As I reach the bottom of the glass, just a hint of fresh grain.

Taste – Revitalizing nectar! Juicy ripe citrus and stone fruit. The bitterness is restrained, but present. The finish is long and slightly resiny compared to the front/mid palate. No weird yeastiness, and no alcohol hotness.

Mouthfeel – It has that softness of some of my favorite IPAs. It isn’t sharp at all thanks to the yeast, wheat, and chloride. Could be slightly fuller, especially in the finish. No corn next time?

Drinkability & Notes – Not sure if it was the yeast or the wheat that turned this into one of my cloudier batches. Despite that, one of a string of excellent mid-gravity hoppy beers. I’m not sure why I ever brew DIPAs? I’ll be trying WY1318 again without the flour to see if it really is that un-flocculant.

Note: this recipe was actually double everything listed, half was run off after 30 minutes for souring.

Mash was 3 gallons of distilled, plus 4.25 filtered DC tap. 2 tsp of 10% phosphoric acid. 6 g each CaCl and Gypsum. Mash pH = 5.33 after 5 minutes of recirculation. 1 gallon of distilled added as a cold sparge. 120 PPM chloride and 140 PPM sulfate, including mash and sparge water.

Collected 6.5 gallons of 1.045 runnings. Boiled 30 minutes without hops. Topped off the boil with 3/4 gallon of filtered tap water.

Added flame-out hops. Whirpooled for 5 minutes, settled for 25. Down to 170F naturally. Thanks to warm-weather ground water only able to chill to 72F. Left at 62F to chill for five hours before pitching.

5/27/15 Added the 3 oz of Galaxy dry hops. Warmed to 66F to encourage fermentation to finish strong.