For our second wedding anniversary, rather than take Audrey out for a fancy dinner, I cooked. I used the meal as an excuse to open up a few bottles that deserved a memorable occasion. The problem with special bottles is that the older they grow the more special they become until there is almost no occasion extraordinary enough to open them. When you finally do, they often are way past their prime.

First Course: Roasted/chilled lobster and baby kale salad dressed with lemon vinaigrette (lobster rolls are a shared favorite, but I wanted to start with something light).

Pairing: 2008 Boon Mariage Parfait (after our wedding we shared a bottle of the 2004 vintage that happened to have been bottled on Audrey's birthday, this one was brewed the year we met). The strong gueuze mirrored the brightness of the dressing without overwhelming the delicate lobster. 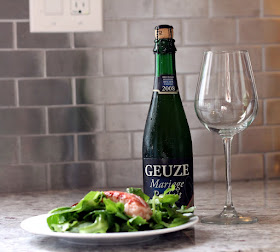 Second Course: Medjool dates filled with mascarpone and Greek yogurt, roasted with olive oil and coarse salt (one of the ~10 stand-outs from the tasting menu at Komi - Audrey's present to me for my birthday last year). I'd made them once before, but the key insight was chilling before roasting (recipe), next time I might freeze them completely and roast them longer.

Pairing: 2009 Pelican Stormwatcher's Winterfest - the last bottle remaining from our Portland trip in 2010. I hesitated to serve such a strong beer so early in the meal, but I needed something substantial to stand up to such a rich dish. Luckily the beer had held up well (Audrey isn't a fan of aged-out barleywines), and the maltiness worked well with the creamy dates. 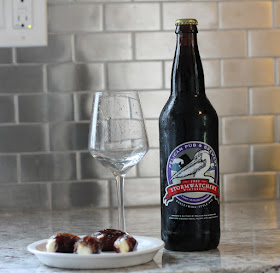 Third Course: Dry-aged New York strip basted with garlic/thyme butter served with pan-fried potatoes (a riff on the meal we cooked after I proposed).

Pairing: 2012 Bruery Sour in the Rye (a bottle I purchased that day, along with our celebratory Bière de Champagne - and actual Champagne). The acidity cut through the fat of the steak and potatoes. The dry-aged steak had almost a Parmesan-nuttiness to it that worked well with the aged sour beer. 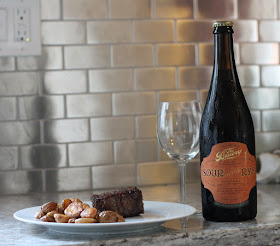 Fourth Course: Chambord-chocolate mousse with rum whipped cream and raspberries, dusted with our raspberry-chocolate wedding cake (I also made chocolate mousse for her on our first date). I vacuum-sealed the top of the cake in two halves, this one got a bit over-compressed...

Pairing: Raspberry-Rum Sour Brown (I bought raspberries in this batch the day I proposed). The beer isn't assertively sweet or sour, so it helped to balance the rich dessert. The assertive raspberry flavor played off the light raspberry in the mousse. 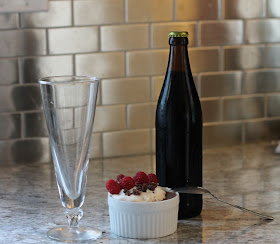 Glad the beers all held up well in the cellar and I didn't screw up any of the dishes! I guess it's time for me to start hoarding bottles to do this again in a few years.
The Mad Fermentationist (Mike) at 6:55 PM