Fresher is not always better for beer as it is for milk. That is even the case for styles that fall apart relatively quickly, like the hoppy 5% ABV American wheat beer I'm drinking tonight. Not to suggest that this fourth homebrewed version of Fortunate Islands would benefit from months of aging, but four to five weeks from brewing to drinking doesn’t hurt. I kegged it two weeks after brewing, the day before the March DC Homebrewers meeting. I decided to bring two plastic bottles I shake-carbed them with my Carbonator cap. With only 24 hours on the keg hops the flavors and aromatics were still discordant and raw. It had a strongly resinous bitterness, like chewing on hop cones or orange peel. It was a unique flavor and not entirely unpleasant, but it didn't exactly make for a session-able beer.

Two weeks of sitting in the keg later, the flavors are now hitting their stride. Hopefully the bright hoppy aromatics hang around for another six weeks or so (and by then there shouldn’t be much left). 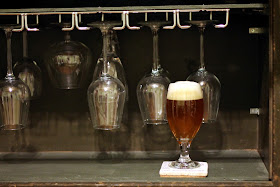 Appearance – The clarity of this golden beer reflects every bit of the 53% wheat malt. Even after 18 days of cold conditioning it isn't nearly as clear as the original. Great sticky lacing from the tight white head.

Smell – Someone at the DCHB meeting accurately described bergamot (Earl Grey tea) in the aroma right after kegging. The citrus has mellowed since, but it is still vibrant and a bit pithy. Tropical fruit is hiding in the back. I find that dry hopping late in fermentation brings out more of the varietal character of the hops (which I prefer), and less "nose in the hop bag." Overall the aroma is a similar, but more intense version of what I get from the Modern Times brewed version. Sadly not much of the stone-fruit peachiness I detected from the ECY culture, although that could come down to other factors.

Taste – Resiny bitterness, may have dialed it up too much. I enjoy it, but it has considerably more IBUs than the original. The hop flavor is nicely saturated with orange, lemon, and mango from the nose, along with some catty-Citra-ness. As it warms the faintest hint of caramel maltiness comes out in the finish.

Mouthfeel – More body than the original, not quite as crisp. Seems right for early spring, but summertime would call for a bit drier. Medium carbonation lifts the aromas and helps cut the body.

Drinkability & Notes – As you may have noticed this has become my favorite sort of beer, hop profile of the Double IPA, alcohol of a pale ale! Happy with the way this batch turned out, sort of Fortunate Islands turned up to 11. It feels and tastes more substantial even though the alcohol is similar. At some point I need to try out these Conan isolates are without loads of hops.
The Mad Fermentationist (Mike) at 7:42 PM