Pairing and Cooking with Sour Beers

My book (American Sour Beers) will finally be published two to three months from now! To tide you over until then I'll be posting trimmings and add-ons to the blog. In some cases these are non-essential sections that simply couldn't fit into what ended up being nearly 400 pages of material. In other cases they are sections deemed too in-flux to be valuable during what will hopefully be a lengthy publishing run! The material in these posts was cut at various points during the process, but none received the complete battery of review and editing that the book itself was subjected to.

This first post is a section I originally had in Chapter 12, "Packaging" (actually it was part of Chapter 16, "Enjoying" before reorganization combined the two). Most of that chapter now focuses on the processes of controlling carbonation and critical evaluation of the finished beer. My thoughts on drinking sour beer with food, and cooking with sour beer are below. Enjoy! 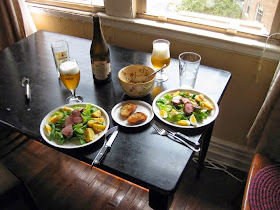 Sour beers are delicious on their own before or after a meal; the lighter ones tend to work better as aperitifs, with the darker-stronger ones saved for nightcaps. With that said, sour and funky beers do extremely well when paired with food. The typically dry flavor of beers fermented with Brett makes them food friendly, and their carbonation and acidity pair well with spicy or rich dishes that can cause problems for wine. Garrett Oliver's The Brewmaster's Table: Discovering the Pleasures of Real Beer with Real Food (Ecco, 2005) is the best reference on the intersection of cuisine and beer, but with a few suggestions you will be able to pick a beer for most situations.

Cheese makes a natural match with sour beer, which scrubs the fattiness of the cheese off the tongue. Stinky cheeses, which often overpower other beverages, often work beautifully with the funky character of Brettanomyces. Milder cheeses mesh more readily with softer beers, especially those with a citrus character. By adding nuts, compote, or other accompaniments you insert another dimension to play with. Fig jam, brie, and a dark sour beer is a harmonious combination (especially when the beer includes dark crystal malt or actual dried fruit).

With the wide range of fruit and spice flavors sour beers contain, it is easy to imagine potential food pairing. Sour fruit beers cut through rich braised meats, which often need to be enlivened. The melanoidins in dark sour beers mirror the melanoidins produced from searing meat, making them a reliable choice with a steak. If you want to impress a wine drinker give them a big tannic sour like Russian River Consecration to drink with their beef. Seafood finds easy matches amongst sour beers, whether it is a tart spiced wheat beer with a lemony white fish or a sour red with crustaceans. Pale sour beers like gueuze are a classic with Belgian mussels, because they are bright enough to cut through the cream or spices in the sauce, but not so aggressive that they obscure the briny bivalves. 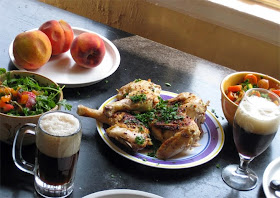 When it comes to dessert, things get trickier. The only sour beers that I have found to work are bigger or sweeter, drier sour beers are not satisfying enough. Even overly-sweet fruit lambics can work with creamy or chocolaty desserts. Avoid anything too tannic, as I find that creamy desserts highlight their rough mouthfeel. A dry fruit beer can work with less rich desserts, even fresh berries; if you drizzle high quality balsamic vinegar over them it can bring the acetic beers into play.

When you have packaged enough sour beer to the point that you can spare a bottle or two for cooking you will be following in the rich tradition of Cuisine à la Bière, and doing something not many people are willing to with a 15 dollar bottle of commercial sour beer. Sour beers lack the hop bitterness that hampers cooking with other styles in many applications. They excel in deglazing pan drippings, or in reduction sauces, taking the place of both wine and vinegar. Remember to reserve a small amount to add right at the end if the flavor needs to be brightened. A pale sour beer can work wonders either replacing the vinegar in a vinaigrette or part of the citrus juice in ceviche. A rich strong sour beer can take the place of port to add complexity to a stew. If you are making a sauce with fruit, try using a beer brewed with the same fruit.

While sour beer can complement a recipe, it can also be the star. Sour beers can be churned into sorbet rather easily as alcohol lowers the freezing point, thus reducing crystallization and in turn lessening the amount of sugar required to achieve a smooth texture. Use a decent sour beer, but it is not worth using your best vintage. Start by allowing the beer to degas (a mixer, blender, or whisk will expedite this process), because dissolved carbon dioxide will disturb the texture of the sorbet. Mix in a quarter cup (60 mL) of sugar for each 12 ounces (355 mL) of sour beer. The more sugar you add the finer the ice crystals and texture of the finished sorbet will be, but I find that excessive sweetness veils the acidity and complexity of the beer (something the cold contributes to as well). Churn the sweetened beer in an ice cream maker following the manufacturer’s instructions. You can allow the sorbet to harden in the freezer, or it can be consumed immediately if chilled bowls have been prepared in advance. Add whole fruit if you want to complement the flavors of the beer, or boost an already present fruit component.

Even the wood from a retired barrel has a use, smoking meats, cheeses, or vegetables. Add the beer-saturated wood as you would hickory, alder, or mesquite to your grill or smoker. It will take trial and error to determine what level and application works best for the flavors of your particular oak, but that is just a good excuse to cook and eat delicious food. This is certainly more fun than turning an old barrel into a planter, or burning them for fuel as Cantillon does.

For more information on cooking with sour beer visit Sean Paxton’s Homebrew Chef blog: homebrewchef.com or read one of the many articles that he has written on the topic.
The Mad Fermentationist (Mike) at 7:44 PM