Before I left DC I jotted down notes on a sour red fermented with red wine yeast (BM45 Brunello to be precise). While I often repitch a few grams of rehydrated wine yeast at bottling to carbonate sour beers, this was my first time adding it so early in the fermentation. The results are interesting, and the technique shows promise, but this beer isn't quite where it needs to be. As I was pitching a "killer" wine strain, it was a mistake to pitch a souring bled that included a susceptible Saccharomyces ale strain (it was just too hard to turn down East Coast Yeast Flemish Ale). 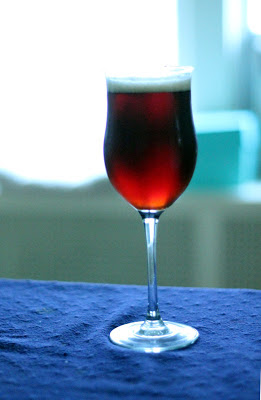 Appearance – Mahogany brown. Tight off-white head, sticky, decently long-lasting for a sour. Even more than a thick jet black stout, it looks like it deserves to be drank in a gentleman's leather-clad study in front of a roaring fire (sadly I’m drinking it on my microfiber couch while watching TV).

Smell – The nose has a big blend of fruit: currants, raisins, and yes an undertone of red wine. There is a slightly toasty-yeasty character behind that. As it warms burnt sugar and toffee emerge. Many of the classic aromatics of a New Belgium La Folie or Rodenbach Grand Cru are there, but a bit busier and less refined perhaps.

Taste – Firm acidity through the entire path of the beer. The complex fruit character carries through from the nose, plummy, rich, with some brighter pie cherry. The finish is a toasty-yeasty character this beer has had since it was young, and not the “Cheerios” character I often detect in my young sours. I wouldn’t call it offensive by any means, just distracting.

Drinkability & Notes – I need to try this little experiment again, with no ale yeast. As is, I’ll drink and enjoy this one, but it doesn’t guarantee that this technique is ready for the limelight, yet.
The Mad Fermentationist (Mike) at 11:10 PM