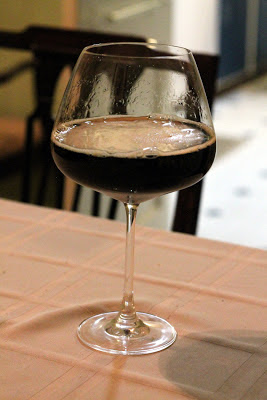 With the second test batch for Modern Times Lomaland saison bubbling away next to a radiator and on a heating pad (it is similar to the first batch, but with wheat in place of spelt and fermenting with WY3711), I wanted to post a tasting of a dark saison I brewed around the same time I began working with the brewery. Brewed fall 2011, this is the fourth in the series of dark saisons my friend Alex and I have brewed. This is the darkest thus far, with cold steeped roasted barley added to the boil. Fermentation was a mixture of saison yeast and several Brett strains (including some White Labs American Farmhouse sent to me by Brandon who writes the always fascinating Embrace the Funk blog); the beer was aged on dried Zante currants and an oak stave that had previously soaked in a red wine barrel.

Appearance – Dark brown with amber-ruby highlights when held to the light. Head retention is dreadful, the thin mocha head fizzing out almost completely in less than a minute.

Smell – Lots of dank Brett funk. Raisin (probably the currants) is the lead fruit, but there is a red wine as well. I'd initially worried that I'd pulled the beer off the fruit too early (to avoid over-oaking), but the currant is at about the right level. As it warms, vanilla from the oak becomes apparent, as does some toasty malt.

Taste – Similar to the nose, with damp leaves, port, cherries, but also a subtle light-roast coffee dark malt flavor. Cold steeping the dark malt successfully prevented them from adding a harsh or acrid character. This is a dry beer, but not overly so, it is after all saison-inspired. The only issue is that all of this complexity covers up the simple peppery flavors of the primary fermentation. Lightly tart, minimal bitterness, slight warming alcohol.

Mouthfeel – Thin, but not watery. Solid carbonation, lower than many spritzy saisons, but I tend to like dark beers a bit under-carbonated compared to pale beers. Somewhat tannic from the oak, but it isn’t obnoxious.

Drinkability & Notes – Really happy with the way this batch turned out. Rich flavors in a drinkable package. The right saison for a winter evening, like the other version I’ll be enjoying this one for years to come!
The Mad Fermentationist (Mike) at 9:40 PM