One of the biggest challenges of my participation in getting Modern Times off the ground has been distance. Jacob is setting up the brewery in San Diego while I continue to live 3,000 miles away in Washington, DC. Collaborating on the recipes for the beers has been easy over email, and my brewing have only benefited from the added planning and perspective. However, getting the resulting beer to Jacob has been a pain.

Bottle conditioned strong beers and sours ship beautifully, but I can’t reasonably send a keg of force carbonated IPA. However, I've  found that the beers I want to drink fresh benefit from kegging. Our solution has been to take advantage of force carbonation, keg hopping, and so forth by bottling session/hoppy beers from the keg. While this could be as simple as sticking a sanitized bottle under the tap (in the same way I fill growlers/bombers to bring to homebrew club meetings), oxidation would cause hoppy beer bottled in this way to struggle to survive the long journey in peak shape. Let alone that to serve a variety of beers to prospective investors, distributors, consumers etc. Jacob needs to dole out any given batch over a couple month.

We started with a Blichmann BeerGun. It allows each bottle to be flushed with carbon dioxide (from a tank) and then filled with beer. It relies on a cold/wet bottle, long/narrow liquid line, low dispensing pressure, and its low-turbulence design to minimize foaming. Despite all of this I was unable to push beer as carbonated as Jacob hoped, without excessive foaming (which knocks CO2 out of solution).

For the most recent round of bottles I used a Fermentap counter-pressure filler from More Beer for the first time. It works by pressurizing each bottle with CO2 and then a bleeder valve allows the CO2 to escape as beer flows in to displace it. When operated correctly this system prevents dissolved carbonation from escaping. The beer can be dispensed at serving pressure, but operation is a bit more complex, relying on a three-way ball-valve (the Beer Gun is operated by two separate triggers for gas and liquid). The first one More Beer sent was defective (pressure leaked around a seam) but I have high hopes for the replacement that just arrived.

Here are tasting notes for the Aromatic Cream Ale, on tap, and in a counter-pressured filled bottle. The bottle was filled two weeks ago, and has been hanging out in my fridge since then.

Appearance – Almost clear, looks a half shade darker than the bottled version, most likely a result of less refraction of light traveling through it. Head last slightly longer, but not by much.

Smell – Fresh, bright hops. Citrus zest accounts for most of it, but a light herbal-spice as well. 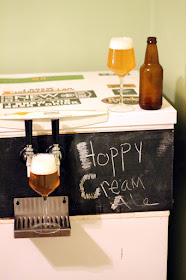 Taste – Soft, not as snappy as I want for a cream ale (maybe the low-ish CO2). The English yeast adds a pleasant fruitiness. The hop flavor is nicely saturated, complex without overwhelming the delicate malt base.

Mouthfeel – Carbonation is a bit low, but I turned the gas off a few days ago because it was pouring a bit foamy.

Drinkability & Notes – Nicely complex hoppy beer, would need to be a bit crisper if we wanted to use the “cream ale” moniker, but would be a fine XPA as is. Solid, but not very exciting.

Appearance – Moderately hazy, most likely chill haze from being a few degrees cooler. Lacing is sticky, but the head doesn’t last long.

Smell – Very clean, again serving temperature may be part of it (although even as it warms it is significantly less hoppy). Slight toasty malt, moderate American hops.

Mouthfeel – Slightly higher carbonation than on draft, but it could still be pricklier. Hopefully the fully functioning filler and a few other tweaks will get a firmer carbonation when I’m ready to send the West Coast IPA and Southern Hemisphere DIPA.

Drinkability & Notes – Refreshing easy to drink. This bottle went into the fridge right after filling, so it didn’t experience the four day trip across the country like the bottles Jacob received. More cream-ale-like than it is on draft, but that isn’t a positive in terms of how it tastes.
The Mad Fermentationist (Mike) at 9:06 PM