My favorite beers are...? and Dry Hopped Sour Tasting

One of the aspects of beer that really sets it apart from wine is the range of ingredients. I am friends with homebrewers who can’t stand hoppy beers, while others won’t brew anything that isn’t hop forward. While some brewers are out foraging for local herbs to flavor their brews, smoking their own malt, or buying fruit at a farmer's market, others are culturing yeast and bacteria to recreate the funky/tart flavors of wild Belgian microflora. This range of ingredients has resulted in a huge number of styles and examples that highlight the various flavors.

I have a pretty open palate. I’m the sort of person who usually orders something new every time I eat at a restaurant, even if what I had the last time was delicious. When it comes to beer, whether I'm brewing or buying, I’m usually looking to experience a new flavor I haven’t tasted before. However, there are certain categories that I often find myself coming back to.

My lack of excitement for malt and yeast forward beers stems from the relatively finite flavors of the ingredients that are commercially available. There is a much higher degree of variation between hop varieties than there is for barley (not to mention the new hops coming out all of the time). While processing has a bigger impact on malt character than it does on hops, it has been a long time since I used a new malt that really made an impression on me. Similarly I enjoy yeast-forward beers, but in many of my favorite beers the yeast provides subtle complementary flavors rather than playing lead.

All that said, I’m torn on what to pick from the list above, hoppy or sour/funky. I’ve had beers from both categories that at the time I’d have sworn couldn’t be topped. I also have certain flavors in both categories that I can’t stand. There isn’t anything worse than oxidized American hops, unless I’m drinking a sour beer with above-threshold acetic acid (vinegar)!

While there are beers I love that feature malt, yeast, spices, or fruit, I don’t like these types of beers consistently or as much as either hoppy or sour beers. The question/options I posed were unfair, as many of my favorite beers highlight a combination of flavors from a variety of ingredients. Sour fruit beers, hoppy beers fermented with characterful yeast, malty beers with subtle spicing etc.

One combination I’ve fallen hard for in the combination of bright hop aromatics layer onto a sour beer. I’ve done it a couple times in the past, but this blended sour might be the most fun. I had a half keg of our first pull from the wine barrel solera, that Nathan and I dry hopped with Hallertau. The bottles were great, but the kegged portion never tasted right. It was sharply acidic and not especially pleasant. As a result, I cut it with a few gallons of the 100% Lactobacillus fermented Berliner weisse, which never soured adequately. Then I keg hopped the blend with a couple ounces of Comet (which HopsDirect describes as “[U]nique, wild, American aroma, and wonderful zesty grapefruit, lemon, and orange notes”). I bought a pound of the 2011 harvest on a whim, and hadn't found an excuse to use them. 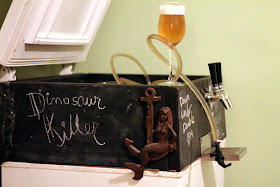 Appearance – Rather generic pale ale appearance, a bit darker than yellow. Some haze, although that may just be from the dry hopping. The head is surprisingly good, most likely thanks to the young Berliner weisee.

Smell – Strong candied citrus aroma, with some pine as well. A vibrant nose with just a hint at the acidity that lays behind the hops. As it warms I get hints of the wine barrel that housed the older portion for 20 months.

Taste – Bright tartness, but not strongly sour however thanks the dilution of the wood aged beer. The hops are bright and crisp, featuring grapefruit zest, and just a hint of Citra-like dankness. The tartness comes across very much like citric acid, sharp but short, not lingering long. Not a super complex beer, but it is still very enjoyable.

Mouthfeel – Moderately thin mouthfeel, bordering on watery. The carbonation is medium-low, it is hard to push a highly carbonated beer from the short/wide tubing I have on the cobra tap without excessive foaming

Drinkability & Notes – Wonderfully refreshing, I only wish I had this on tap when the weather was hotter. The Comet hops are a fun addition, I’ll have to figure out something more traditional to do with the few ounces I have left in the freezer.
The Mad Fermentationist (Mike) at 7:14 PM