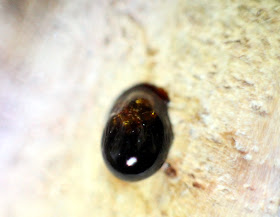 With the spiced Rumble-barrel-aged Imperial Oatmeal Porter filling the role of something rounded, sweet, and dessert-like, I wanted to barrel-aged another dark beer that would be sharper and more aggressive. For the second fill of the Balcones Malt Whisky barrel I brewed an Imperial Rye Stout. It includes a firmer hop bitterness (despite similar IBUs), and some really dark grains to provide a sharper roast.

The pressure inside the barrel from the dissolved carbon-dioxide of the beers has pushed some concentrated spirits from the wood. It forms small dark spots of sticky liquid on the exterior of the barrels. This is something I first read about on Sean Paxton's blog years ago, but didn't see for myself until recently. Their flavor is amazing, like a condensed whisky extract (oak, vanilla, and char), minus the alcohol.

One of the things that really gets me excited about a big stout is a full, creamy, oily, and viscous mouthfeel. The Russian Imperial Stouts that achieve this through dextrins alone tend to be too sweet for my tastes, especially after a couple years of aging cuts their hop bitterness. To ensure that wouldn’t be the fate of this batch, I added two pounds of flaked rye, which provides body without excessive sweetness. This will be especially valuable as at 1.080 this beer actually started with slightly less carbohydrates than some vintages of Three Floyds Dark Lord finish with (I’m not kidding). 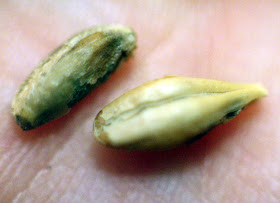 Rye is one of those ingredients whose flavor is hard to describe. The Bruery's Rugbrød has one of the most intense rye flavors of any beer I have tasted, but all that means is that it has a particular toasty character. I find rye malt (pictured next to pale barley) to have a more intense flavor contribution than un-malted rye, but this recipe also includes chocolate rye. Despite it's name, this roasted malt is much paler than standard chocolate malt and dehusked, giving it a mellower flavor contribution.

I moved the Rye Stout to the barrel as soon as I determined the Weizen Trippelbock that was its first resident had extracted enough oak and booze (three weeks was already pushing it). This is the last of the four clean beers that will be aged in these two 20 L barrels before I turn them sour (White Labs new WLP665 Flemish Ale Blend arrived today). All told I’ll end up with about nine cases of barrel-aged strong-beer, which should hold me over for at least a few years. I’ll certainly be ready for the DC Homebrewers February High Gravity meeting, if not 2013 then definitely by 2014…

Borrowed Pete's Barley Crusher because mine had been having problems feeding grain.

Batch sparged (unaltered water). Collected 8.5 gallons of 1.063 runnings. A bit quicker boil-off than expected, added 1 qrt of water with 15 min left in the boil to compensate.

Chilled to 64 F and pitched the un-decanted starter. Left at 62 F to begin fermentation. Good activity by the following morning.

11/25/12 Has developed some excess carbonation, switched to an airlock.