Always hard to convince myself to open the last bottle of any batch, but I had a good excuse to pop the final Wheat Tripelbock tonight (I still have one bottle of the bourbon-soaked oaked version left). BYO wanted a better picture of the finished beer, which Nathan and I featured in an article we submitted about dark lagers for the February issue (which will be my first cover story I'm told!). 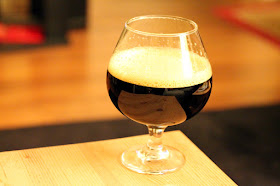 Appearance – Very dark brown, bordering on black in the wide bowl of my snifter. It has red highlights when held at an angle to the light. Unsurprisingly after a few years in the bottle, the beer is crystal clear. The thin tan head has big bubbles, but still maintains excellent retention.

Smell – Rich and complex. Dominant caramel, but it doesn’t smell burnt. Dark fruit as well, but not as one-note RAISIN like Special B can be. As it warms there is a whiff of alcohol occasionally, but otherwise it is very clean. Despite its age I don’t pick up any oxidation.

Taste – Starts with the caramel and plums from the nose. The middle is dominated by dense bready/toasty malt, Munich especially. Hint of unsweetened cocoa in the finish, a nice twist on the standard dark German beer. Still tastes remarkably fresh for a beer brewed in 2008. Plenty of sweetness, but the alcohol and light roast cut through it well.

Drinkability & Notes – Much gentler and more balanced than it was a few years ago. Rather than being close to cloying the beer seems drier, despite the fading hop bitterness. This batch appears to have a lot more color than the new version I recently racked from a whisky barrel into a keg for lagering (it has 2% less Extra Dark Crystal).

If you are interested in reading the article about dark lagers, then subscribe to BYO (through my affiliate link ideally). The article includes tips from the brewer that inspired this beer (Steve Berthel of The Livery), as well as Scandinavian brewer extraordinaire Anders Kissmeyer talking Baltic porter, and unstoppable medal winning machine Jason Oliver of Devil’s Backbone and Czech-brewing-encyclopedia Evan Rail philosophizing about decoctions and tmavé.
The Mad Fermentationist (Mike) at 8:12 PM