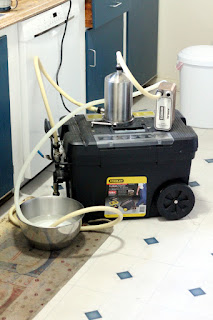 The third variation of the Modern Times' Hoppy American Wheat only needed a few minor tweaks. The second version was a bit too light/thin, so we raised the original gravity, increased the mash temperature, and boosted the amount of CaraVienna. A slightly more aggressive hopping rate, not to mention the fresh harvests of Citra and Amarillo, should be enough to balance. That’s about all I’ve got to say about the recipe itself that I haven't said before.

A few months ago I made the switch from the immersion chiller I’d used since I started homebrewing in 2005, to a newfangled Therminator plate-chiller. To use it, I finally put into service the March pump I bought a few years ago and mounted inside a plastic tool chest (inspired by Ryan Lockard's BYO article). In-line chilling also allowed me to start using a hop-back to cram even more hop aromatics into beers. I'm glad I didn't do a write-up of the new equipment immediately, because brewing a half-dozen batches with this setup has taught me a few things. 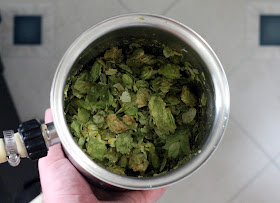 Unlike an immersion chiller, which you can throw into the boil for the last 15 minutes, this setup takes a bit more time and effort to sanitize. While the wort boils, I connect all of the pieces with fittings and heat-resistant hoses (pump > hop-back > chiller), and cycle a few gallons of hot PBW solution through. After draining the cleaner, I cycle a couple changes of hot water through to remove any residue. This is followed by Star San. An acid based sanitizer is especially valuable in this case because its low pH prevents beerstone from accumulating in the tiny capillaries of the plate chiller. 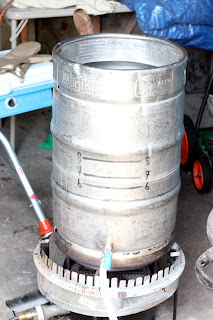 After draining the Star San I open the hop back (HopRocket) and put two to three ounces of whole hops inside (pellets would clog the screen). I do my best to break up any clumps of hops to allow easier flow. Before I got the HopRocket I'd read a number of complaints, but I’ve never has an issue achieving a reasonable rate of flow even without using the bell/dome that holds less than an ounce of hops.

Luckily for me, my friend Pete recently moved and as a result I borrowed his keggle while he gets situated. Having a kettle with a valve makes priming the pump simple. When the boil is finished I usually toss in a couple ounces of hops for a hop stand. I allow the hops to steep in the hot wort for 15-20 minutes while I connect everything. This keggle has a MacGyver’d hop strainer which works well for whole hops, but I bag any pellets added to the boil.

I connect the hose that leads to the inlet of the pump to the kettle. Opening the kettle's ball valve completely and cracking the pump’s ball valve allows the pump head to fill with wort. It is ideal to mount a March pump so that the inlet is at 6 o'clock, and the outlet is at 12. This orientation allows the pump to be primed easily. It is also smart to always plug-in a pump to a GFI (Ground Fault Indicator) outlet to avoid the risk of electrocution. If you don't have one wired in where you brew, you can pick up a portable one (like the one I use). 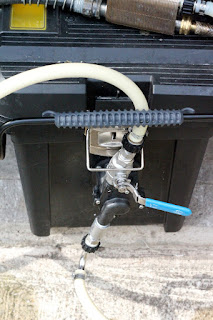 The March pump has two speeds, on and off. As a result you’ll need a ball valve to control the rate of flow. It is best to have a pump pushing against the valve, rather than pulling through it so that it doesn’t run dry and lose its prime. When using the hop-back it is important to open the valve a very small amount initially. This gives time for the hop-back to fill without forcing the hops up against the top screen. Unlike most other hop-backs, the HopRocket fills from the bottom, so the wort filters up through the hops and out the top. This causes any trapped air to rise and be forced out. As a result the near-boiling wort passes through the hops, and is immediately chilled without a chance for the volatile oils to be driven off. 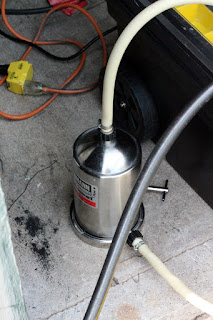 For the chiller it is a good idea to run the chill water full-blast even before you start your pump even though the wort may not reach the chiller for a couple minutes. That way you won't forget or have to run away from the rig while it is runnings. Ensure you have your chiller positioned in the indicated orientation to maximize the contact of copper separated hot wort and cold water. Once wort is running into the sanitized fermentor, you can adjust the pump's ball valve based on the final wort temperature (the slower you run the wort the colder it will become). Remember that no chiller that relies on ground water can cool the wort below the temperature of that water. As a result, in the summer I still rely on ice-bath pre-chiller to get down to my desired pitching temperature.

When the kettle runs dry you’ll have at least a half gallon of wort trapped in the hoses/hop-back/chiller. I turn off the pump immediately, running it without liquid can cause damage. I then kink the hose that runs from the pump to hop-back and disconnect it from the pump side. It is especially important to have a relatively easy to disconnect fitting here (I use Blichmann Quick Connectors). I then lift the hop-back, turning it over to allow the wort to drain via-gravity through the chiller and into the fermentor. Done. 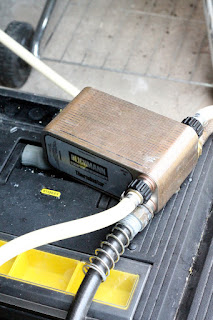 After turning off the chill-water and aerating/pitching the wort, it’s time to clean. I have an back-flush assembly that allows me to run water through the wort outlet of the chiller, forcing any bits of hops or trub back out the way they came. Then I run it the other way. Everything else is hosed off/out. Ideally I’d probably re-run the PBW and Star San cycles, but I usually don’t have the effort at that stage of the brew day.

From tasting the pre-dry hoped beer, there is definitely more hop character than I ever got from even massive flame-out additions. However, after a big dose of dry hops, I’m not sure that the difference is discernible. When sanitized correctly, this closed system lowers the small chance of unwanted airborne microbes causing problems. It is especially beneficial if you brew larger batch sizes because the set-up and clean-up are the same, and the actual chilling usually takes less than two minutes per gallon (and will be even faster as my ground water continues to cool with the weather).

Hopefully seeing how I'm chilling will help those of you considering a similar setup. This certainly isn't the only way to use this equipment, but it is what has worked for me thus far. 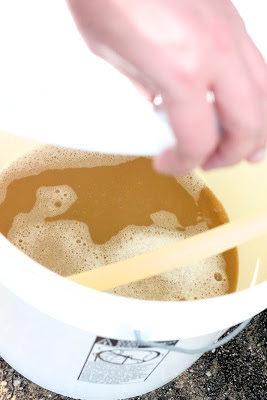 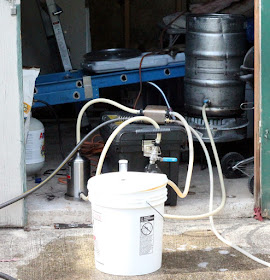 Filtered tap water cut with 5 gallons of distilled. 4 g of CaCl, and 7 g of gypsum split between the mash and batch sparge. Sparged with 175 F water.

Flame-out hops left in the wort for a ~15 minute hop stand. Chilled to 68 F, aerated for 45 seconds, and pitched the yeast.

Noticed some small balls of hop extract at the bottom of the pot while cleaning up The Hop extract was also a bit darker than it usually looks...

11/7/12 Added half the dry hops, loose to the primary fermentor.