Rather than talk in depth about each of the five variants of my second iteration of a Brett-bottle-conditioned Belgian Single individually, I'll give general impressions on the differences between them. They were bottled in early August, so they are still relatively young. 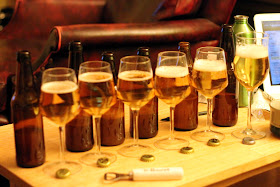 Appearance - They all look very similar. Each is a stunningly-clear light golden yellow. Thin white head, lacks the thick mousse-like rocky head I'd prefer, despite the addition of wheat this time around. None of them gushed, or appear to be over-carbonated in the glass despite the Brett activity.

Wyeast Brett B provides a slightly funky-earthy character. Not much malt or complexity to speak of.

White Labs Brett Trois has a fruitier aroma, with a more rounded, agreeable balance to the aromatics, but they are somewhat muted.

CB1 already has a classic aged-out Orval character. Very farmyard, but not overpoweringly funky or in any way off-putting.

CB2 is just as potent, it adds some fruitiness to the CB1's funk. Really potent, complex, and enticing.

Plain is a bit bland, it doesn't have the brightness or snappiness of the original batch.

Wyeast Brett B has more funk in the flavor than it did in the nose, nicely saturated continuing into the finish.

White labs Brett Trois is shorter, brighter, and not very funky. Some tropical aspects, but without the hops of the IPA I fermented with it, it doesn't taste nearly as much like pineapple juice.

CB1 Really funky in the flavor, more so than in the nose. A bit of the dreaded urinal, not bad, but not great either...

CB2 Well balanced, slight tartness, fruit and funk together, like an amped up version of Wyeast Brett B combined with White Labs Trois. Excellent!

Plain is a bit flatter than I'd like it ideally.

White Labs Brett Trois seems to be the most carbonated.

CB1 is similar to the Brett Trois, but not quite as crisp.

CB2 is similar to the WY Brett B, could use a bit more carbonation.

Plain is a fine beer, but it needs to be crisper and maybe slightly drier to be great. The second to last bottle of the original batch I opened has held up really well in comparison.

Wyeast Brett B an intro to funky beers, not too aggressive, soft. It should develop with more time as the White Labs Brett B did in my first batch of this recipe (eventually reaching mini-BOS at the final round of the 2012 NHC).

CB1 is a bit funkier than I like, despite its young age. Not entirely unpleasant, but it obscures all of the other characteristics of the beer.

CB2 The winner for my palate, complex, balanced, really delicious. This is a winner, especially considering how young it is. I'll be interested to see how it is in another three or six months.

It is impressive how much funk/Brett character the strains (CB1 and CB2) Jason isolated from Cantillon produced in such a short amount of time. I'm trying to talk Jacob into releasing something similar to this experiment as a box/gift set or six-pack for Modern Times (3725 Greenwood St. San Diego, CA 92110), same base beer finished with a variety of Brett strains (he doesn't seem to need much convincing).
The Mad Fermentationist (Mike) at 7:34 PM