The DC Homebrewers club is rapidly approaching our fourth anniversary! Three years ago we started an annual tradition of brewing a collaborative beer dole out a couple bombers at a time to celebrate each subsequent anniversary. The goal is eventually to have six or seven different vintages to sample each year. The brew days are good excuses to get together drink a few homebrews, and brew a recipe that none of us would have on our own. 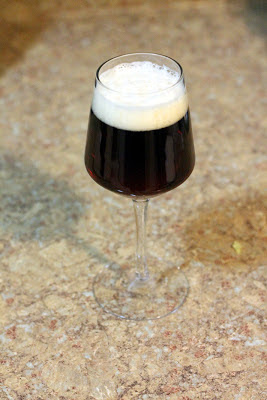 The first beer was a local smoked/honey stout we brewed at my house. The bottle I brought to the October meeting held at District ChopHouse, their brewer Barrett Lauer provided the yeast, was still in great shape. The second anniversary brew was the Cabernet-grape-spiked English barleywine sitting in front of me now (this is my one bottle opened in payment for buying the ingredients). The third batch was spearheaded by Josh, our current club president, an old ale that was still in secondary last I heard.

Appearance – Rich reddish-brown body, very clear. You might not know there were grapes in there from the color alone. The head is about an inch thick, and slightly off-white. Decent retention, but by the time my glass is half-empty the foam is a fine ring around the edge.

Taste – The flavor is mellow, rounded, and reasonably sweet. I don’t get as much caramel as I had hopped for from the long/concentrated boil. The oak and grapes provide enough character/tannins to counter the sweetness. It doesn’t have the depth of complexity that I expect in a great strong beer, but it is pleasant enough. There is a subtle alcohol warmth, but it isn’t hot or boozy.

Mouthfeel – Medium mouthfeel for a barleywine, not big or sticky. Medium-low carbonation, about right for a strong ale.

Drinkability & Notes – I don’t brew (or drink) many barleywines. The balance never seems to hit the right mark for my palate. They always taste like they are lacking, or that they aren’t “worth” the high alcohol content. Sadly this one falls in that second category, it just doesn’t have anything that draws me in. It isn’t bad or off, and I like it more than a lot of the commercial barleywines I’ve had, it just tastes lacking. Hopefully time will bring some additional complexities.

I’m a bit disappointed with the technique of boiling down passed the target volume and then topping off. Like boiling the first runnings to a syrup, it makes a good compliment to the flavors of caramel malt, but by itself it isn’t enough to replace their flavors in a beer like this. Fun, but probably not worth the additional fuel.
The Mad Fermentationist (Mike) at 9:00 PM