This West Coast IPA is the last of the four hoppy beers I brewed over four consecutive weekends earlier this fall. The recipe owes some similarities to the 100% Brett Trois IPA I brewed earlier this year, but odds are they won’t taste very similar. Fermentation with WLP007 (Dry English Ale) harvested from the Hoppy Cream Ale will give this batch a very different yeast profile, and the Simcoe-heavy dry hop will lead to a resiny aromatic profile compared to the tropical fruit packed aromatics of the Brett IPA. As a side note, White Labs recently announced that WLP644 Brett Trois will be going year round! 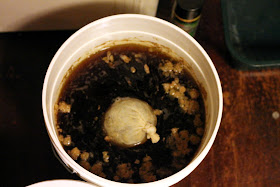 I’m interested to see how the Briess Pale Ale Malt I used as the base malt for this IPA performs in a hoppy beer. I didn’t realize when I bought the sack that the color is about double the Lovibond of the CMC Canadian 2-Row I’d been using previously. We’ll see if the slightly toastier flavors come through in a positive way, without making the beer seem too “English.” The Dank Amber IPA recipe was based on even darker/toastier Best Malz Vienna and did not taste overly-malty, which seems to indicate the pale malt won’t be an issue.

While writing a recipe for a hoppy beer I usually default to an even split of my chosen hop varieties, with similar additions made on both the hot and cold sides of the brewing process. From there I can adjust subsequent iterations based on which aromatics I want to highlight, replace, subdue, or eliminate. Even though this is my first attempt at this recipe, I'm using varieties I’ve brewed with numerous times before. As a result I decided to focus on the more citrusy varieties (Citra and Centennial) on the hot-side (hop-stand and hop-back) and then follow that with the pine-ier Simcoe for dry hopping. My goal was to create a beer that evolves more as it crosses the palate. We’ll see if it works.

The way that homebrewers tend to think about hops is as discrete spices. (e.g., Cascade adds grapefruity flavors. Galaxy is more tropical. Grassy-spiciness calls for Saaz. etc.) However, unlike the wide variety of spices in your pantry, hops are all varieties of the same plant species. As a result many of these flavor differences result from different ratios of the same set of aromatic oils (although not all hops share an identical set of aromatic compounds). I watched a video a few months ago of an interview with Pat Mcilhenney from Alpine during which he mentions that when they develop a recipe for a hoppy beer they target a standard ratio of hop oils. He didn’t provide their actual target though. Their hoppy beers, especially Hoppy Birthday, are so good that I couldn't ignore the suggestion.

Despite making up only a tiny portion of the hop's weight, the hop oils provide the aromatics, as opposed to the much more prominent alpha and beta acids which create the bitterness. I’d never thought about the amounts of myrcene, caryophyllene, humulene, and farnesene etc. in my hop blends before. Here is a list of aromatic descriptors for these as well as many other hop oils. The Beer Sensory Science blog also has several interesting posts about the chemistry underpinning hop aroma perception. 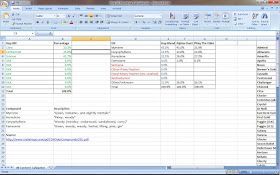 To help me better understand what is happening in different hop blends I created a spreadsheet (free to download here - HopOil-PercentageCalculator.xlsx) that calculates the percentage of each oil given the hop bill. Select a hop you want to add from the drop-down lists on the left and enter its percentage of the hop bill next to it in GREEN (the table at the far right contains average values for total oil content and a breakdown of those oils - if anyone knows of a more complete or reliable source, please pass it along). The results are populated in the middle table in BLUE. In most cases only the most common four oils were specified, so don't trust the percentages of the others unless you ensure that all the selected varieties include percentages for the other oils.

For comparison I included the percentages that these average hop numbers spit-out for Alpine’s Duet, which Pat noted is an even blend of Amarillo and Simcoe, and Russian River’s Pliny the Elder (using only the late boil additions and dry hops).

The timing of the hop additions plays a role in the final aromatic profile as well because some oils are more volatile than others. The sheet does not take this fact into account. While the big four mentioned above account for 70-90% of the total oil content of most hop varieties (according to Indie Hops, pelletization tends to reduce the relative percentages of humulene and myrcene, for better or worse), there are other oils that contribute substantially and positively to hop aroma. As a result two blends that reach the same ratio of the four "primary" oils, will not yield identical beers. I was not able to find average values for all of the oils for each hops, not to mention that there is a huge within-variety variation resulting from growing and packaging conditions. As a result, I wouldn’t suggest using this spreadsheet for anything too serious unless you obtain an actual analysis of your hops to use in place of the generic numbers.

I’ll be brewing a couple less traditional hoppy beers this winter. Jacob and I are currently working on test batches for a split batch of wit (half with hibiscus, half dry hopped with Galaxy and Rakau) and a hoppy tripel, evolved from a batch I brewed a few years ago, this time with Amarillo and Simcoe. I enjoyed the history in Mitch Steele’s recent IPA book, but now I’m really excited about the scientific and process details in Stan Hieronymus’s For the Love of Hops (especially after talking with him while we were both visiting Crooked Stave’s tasting room during GABF).

Filtered DC water cut with 4 gallons of distilled. 8.5 g of gypsum and 4.5 g of CaCl split between the mash and sparge.

Collected 7 gallons of 1.055 runnings with a fly sparge.

Chilled to 61 F. Oxygenated for 45 seconds. 1 cup of yeast slurry harvested from Aromatic Cream Ale. Left at 64 F to ferment. Good fermentation by the next day.

12/2/12 Added the first dose of dry hops (2 oz), bagged and weighted, to the primary fermentor. Not as much hop character as I would have expected at this point, but the dry hops will help, so I'm not worried.

1/10/12 One of the best hoppy beers I've brewed. Bright, fresh, citrus, tropical, and pine. Maybe slightly sweet (or just fruity?), but with the right amount of bitterness for my tastes.
The Mad Fermentationist (Mike) at 9:19 PM