I think double/imperial IPA is one of the easiest styles to brew an “alright” version of, but one of the most difficult to really nail. Loading a large quantity of bold hops into a recipe can obscure many process flaws. However, to produce an excellent strong/hoppy beer you have to address a number of contradictions. Double IPAs are high alcohol beers that need to be served really fresh. Recipes must contain a huge amount of malt, but the finished beer should taste dry and bitter. The best examples are intensely flavored, but still highly drinkable. It is a style that is young (not much more than 10 years as a bottled, year-round beer), but there are already so many breweries that brew at least one.

My favorite commercial examples of the style are all around 8% ABV. Less alcohol than that and it isn’t really a DOUBLE IPA, higher than about 9% ABV and the booze starts getting in the way of the hop aromatics. Some of my favorites are Russian River’s Pliny the Elder, The Alchemist’s Heady Topper, Lawson’s Double Sunshine, The Bruery Humulus Lager, and Hill Farmstead’s Abner. All of these beers have huge hop aromatics, bitterness that isn’t too harsh, and clean/subtle malt bases. 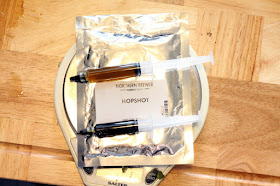 Hops can be of any variety, as long as they are high in oil content. It would be almost impossible to add enough of a subtle low-alpha-acid hop variety to achieve the required aromatics and bitterness without losing most of the wort to hop absorption. For this beer I paired Rakau from New Zealand with Galaxy from Australia. I brewed a similar recipe last year that was 100% Galaxy and while enjoyable, the result never wowed me. Using hops that are in pristine condition should have been on the list of tips for brewing hoppy beers that I included with its recipe post! Lesson learned, no more buying two-year-old whole-hops shipped directly from Australia. Many of the Southern Hemisphere hop varieties share aromatic commonalities with newer American varieties like Citra; they impart lots of tropical fruitiness, with a hint of dankness in high concentrations.

I’d been underwhelmed by the bitterness of Northern Brewer’s HopShots on their own. It seems much lower than their numbers suggest. The bitterness is clean and soft, perfect for many styles, but not IPA or DIPA. As a result, for this batch I split the bittering addition between hop extract and Columbus. For my palate Columbus adds a wonderful lingering tongue-grabbing bitterness that I think is a hallmark of both American IPAs and DIPAs. I was interested to read in Mitch Steele’s IPA: Brewing Techniques, Recipes and the Evolution of India Pale Ale that Shaun Hill uses a blend of extract and hops to bitter Hill Farmstead's James, a black IPA.

Brewing a strong beer that you want to start pouring less than six weeks after brewing, demands minimizing the creation of off-flavors that would need time to age-out. Pitch enough yeast for a strong/healthy fermentation, but avoid over-pitching which strips bitterness from the beer (for this batch I harvested slurry from my Third Hoppy Wheat, but didn't pitch the entire yeast cake). Perform most of fermentation near the lower bound of the yeast lab’s suggested temperature range for the strain, but raise the temperature toward the end of fermentation to guarantee a dry finish. A low final gravity should also be encouraged by a moderate mash temperature, minimal crystal malt, and 5-10% (by extract) refined sugar. Residual sweetness gets in the way of hop bitterness, and can yield a DIPA that taste similar to a young American barleywine. 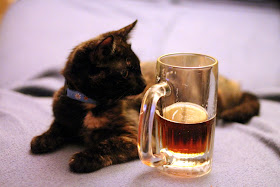 I became distracted (playing with our two new kittens, Ale and Joyce) as the wort heated and as a result lost about a gallon to a boil-over. Rather than dilute or add malt extract, I just kept going; having four gallons of DIPA on tap is probably a better idea than five anyway. For Galaxy and Rakau all I could source was pellet hops, so I skipped the hop-back, and revived my old technique of adding additional hops to the kettle right at the start of chilling (after the hop-stand addition has 30 minutes to soak in the hot wort). Luckily the Galaxy smelled much fruitier and brighter than last time.

To make dry hopping a bit easier I have begun vacuum-sealing the dry hop additions on brew day. I tend to add many of the same varieties to both the boil and post-fermentation, so I simply weigh the additional hops and seal the one or two blended additions separately before resealing the bulk hops for storage. When I’m ready to dry hop I sanitize the mesh bag (or nylon stocking) and glass marbles that will weigh it down, and then add the pre-measured hops.

Lost about a gallon of wort to a boil-over

30 minute hop stand with the first dose of aroma hops, the second dose was added at the start of the chill.

Yeast harvested from the third batch of Hoppy American Wheat, about one cup of thin slurry. Chilled to 68 F, oxygenated for 45 seconds. Left at 64 F to ferment. Good activity by the following morning.

1/4/12 Tasting notes for a very solid beer, but the the hops didn't translate with the flavor combination/balance I wanted. Too much fruitiness, not enough anything else.
The Mad Fermentationist (Mike) at 5:43 PM