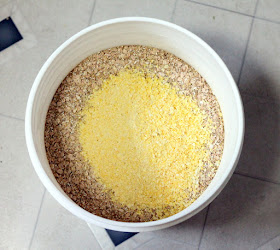 There are very few American beers brewed with grains other than the big six (barley, wheat, oats, rye, corn, and rice). For whatever economic/flavor reasons these are the grains that produce the huge range of beers of beers we see today. There are a couple others that see occasional use, sorghum (in gluten free beers), buckwheat (in my sour amber ale), and today’s star: spelt!

Spelt (Triticum spelta) is an ancient variety of wheat, which is often marketed as farro for Italian cooking (although farro is not always spelt). It is high in protein (~17%), which is one of the reasons it sees limited use in brewing. Take a look at the gigantic protein hot-break clumps that developed in the boil (and that shot is with no water treatment, hop additions, or kettle finings). Its flavor is similar to wheat, but to my palate provides a slightly toastier character. I’ve had it in Brasserie de Blaugies Saison d'Epeautre, and Sixpoint’s Mad Scientists #1 Spelt Wine. Some brewing suppliers sell malted spelt, but it was easier for me to find unmalted rolled spelt from Bob's Red Mill. 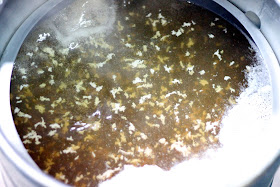 Saisons have crept up in alcohol content over the years. Originally these were light refreshing beers, and that is still where their slight tartness and peppery yeast work best in my opinion. However, I didn’t want to push the alcohol down under 4% into the “table saison” range, as many of these come across as thin. With good attenuation this 1.043 OG beer should end up close to 5% ABV. Perfect to drink from a 16 oz can about a year from now when Modern Times opens.

For this first attempt at a test batch I wanted to focus on the yeast. I think the classic Dupont strain (WLP565/WY3724) produces remarkable flavors, but it can also be sluggish and unreliable even under ideal conditions. Wyeast French Saison (3711) is the opposite, a quick reliable attenuator, but the flavor is more tropical and less spicy than I would prefer. To try out two yeast strains I brewed a double batch split between White Labs Saison II and their newly released Saison III.

While saison yeast stains are often known for their tolerance (and in some cases need) for elevated fermentation temperatures, this is no excuse for not having control. I pitched both halves of the batch in the mid-60s F, allowing them to ramp up into the mid-80s over the course of a few days. Despite being mid-August in DC, nights in the mid-60s required keeping the fermentors insulated with blankets to maintain a stable temperature.

Jacob and I are planning to let the flavor of this base beer determine where we take the recipe. Does it need a more complex hop aroma? Should we spice with a touch of black pepper? Maybe blend with a portion of beer that has been inoculated with Brett? We will see.

Great protein break despite a lack of water adjustments.

Chilled to 90 F with ground water, then whirlpooled and switched to recirculating ice water. After 20 minutes it was down to 70 F. I racked out of the keggle, which resulted in really clear wort, but a one gallon loss. So only 4.5 gallons in each of the buckets.

Let the wort and starters sit at 66 F for two hours before oxygenating for 45 second and pitching the non-decanted starters. Left at the same temperature to begin fermenting.

10/18/12 Glad I split the wort, the Saison III is the standout. Despite finishing at 1.004 it has a decent body, slight tartness, and great balance. The Saison II is cidery, thin, and slightly fusel. Tasting notes.
The Mad Fermentationist (Mike) at 7:30 PM