Unlike just 10 years ago, there are now a lot of American breweries and a lot of desire from us beer nerds to buy beers with unique flavors. Sadly, I think this has resulted in a number of breweries putting marketing before brewing. Releasing gimmicky beers that may convince people to buy them once “just to try it” that aren’t good enough to be purchased a second time.

I’m hoping one of the things Modern Times (shiny new website) will be known for is the sophistication of our flavor choices. You aren’t going to see any beers flavored like carrot cake. We won’t add chai tea to a Sahti just because the last syllable of the style sounds like “tea.” We also won’t be adding ingredients that sound good on the label, but aren’t noticeable in the glass. We’ll have a small pilot system, so we won’t be brewing 30 bbl (930 gallon) batches of beer that haven't been dialed in.

I’m not saying we won’t brew anything unique, weird, or controversial though. For example, I love mixing Brettanomyces and aggressive hopping. One of my biggest complaints about breweries combining sour or funky beers with aromatic hops is that many don’t do a good job. There are only two general methods that I think work. #1 Make a standard, low-hopped, sour/funky beer, let it age until the acid/ester profile is where you want it, then dry hop and serve quickly (New Belgium's Le Terroir is a great example of this method). #2 Brew a hoppy 100% Brett beer that can be packaged quickly (the New York collaborative Super Friends IPA, is my favorite of this breed). For this batch of 100% Brett Trois IPA it was less than five weeks between brewing and drinking a glass of fully carbonated, dry-hopped beer.

What makes a beer like this different than the commercial beers I poked fun at above? Well first of all it actually tastes good. I also selected ingredients with the final flavor in mind. I chose hops (Citra, Centennial, and Chinook) and a Brett strains (Trois/Drie) that have complementary flavor profiles. The resulting beer has a balance that combines characters from the wort and fermentation to give a wonderfully complex, tropical-fruit flavor. 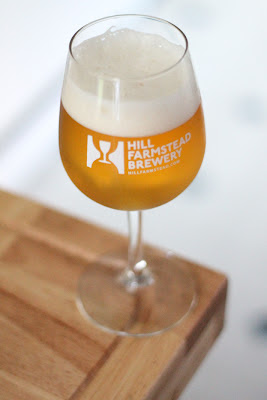 Appearance – Deep sunny yellow beer. There is a slight haze that causes the beer to glow in the early evening sun. The moderate white head doesn’t last very long, despite the wheat malt and hops.

Smell – The nose is almost straight tropical fruit juice. Mango and pineapple especially. Not a hint of grassiness. It is really difficult to tell where the hops end and the Brett begins. There is a slight hint of doughy wheat in the background.

Taste – Similar in its fruitiness to the aroma, but rather than the sweetness you’d expect from juice, it has a balanced bitterness of an IPA with a bare hint of tartness. The light bready flavor is there in the finish. Basically no “classic” horse-blanket Brett funk, but I think the fruitiness of the Brett primary fermentation works perfectly with the Citra, Centennial, and Chinook.

Mouthfeel – Dry, and on the thin side, but no more so than many West Coast IPAs. Solid carbonation.

Drinkability & Notes – Not the most complex IPA I’ve ever tasted, but certainly one of the most unique. Perfect hoppy beer for summertime drinking: quenching, refreshing, and fruity.
The Mad Fermentationist (Mike) at 6:35 PM