Straight-ahead Belgian tripels are not one of my favorite styles. I don't find them offensive, but the flavor of even highly regarded examples rarely excites me (I feel the same way about Oktoberfests). The combination of clean pilsner malt and yeasty-fruit always tastes like it is lacking something.

I've been blown away by a few variations on tripel, like Captain Lawrence Xtra Gold (dry hopped), Allagash Tripel Roselaire (wine barrel aged with a mixed culture), and Le Trou du Diable La Buteuse Brassin Special (apple brandy barrel aged with Brett). In all of these cases the added treatment dials up the complexity without damaging the drinkability.

On the other hand, I wasn’t a fan of Captain Lawrence Golden Delicious (Xtra Gold aged in apple brandy barrels) and Allagash Curieux (Tripel aged in bourbon barrels) because they had too much barrel/spirit character for my tastes. Dry/pale beers require a light touch when it comes to barrel aging because they don’t have the big flavors or residual sweetness of an imperial stout or barleywine. Luckily for homebrewers this is easy to remedy, just add less oak to the fermentor.

My attempt to learn  from these examples (tripel aged on Calvados soaked oak cubes with cultured Russian River microbes) didn’t get quite as dry or funky as I wanted, so I dry hopped most of the batch with a hefty dose of Citra with excellent results. Not wanting to give up on my original vision of the batch I bottled a gallon straight, and here is the result. 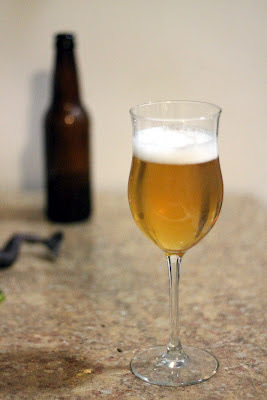 Appearance – Blurred blonde body. The snowy head only maintains loft for a few minutes before collapsing on itself (apparently a pound of flaked wheat wasn’t enough to compensate for the extended aging with bugs).

Smell – The first note I get is floral, but that ephemeral character quickly escapes. After that the nose is a multifaceted blend of Belgian yeasty-fruity-spice and earthy Brett. There is a sweetness that calls apples to mind, although I’m not positive it is contributed by the Calvados.

Taste – The Calvados and oak are much clearer in the flavor than the aroma, but they are nicely balanced by the base beer. There isn’t much acidity, but it is crisper than most tripels. The Brett is subdued, but provides needed complexity to the apple and primary yeast character.

Mouthfeel – Slightly tannic from the oak, but not overly so. More substantial than a tripel ought to be, but it works well with the bigger flavors and the dryness of the oak. Solid carbonation, but it could be a bit snappier.

Drinkability & Notes – Not how I envisioned this one turning out when I brewed it 20 months ago, but I’m happy with it anyway. I don’t like it as much as the variations I cited above (although with Citra it was close), but the wood and microbes did a good job of adding complexity without overwhelming what is (despite the high alcohol) a rather delicate style.
The Mad Fermentationist (Mike) at 10:32 PM