While it might sound similar to Founders Red's Rye on the surface, this Red Rye IPA shouldn’t share many flavor similarities. Unlike the other test batches I’ve brewed for Modern Times, this one was a bit further away from any of my previous recipes. (As an aside, Jacob is about to dive head-first into brewery site selection!) The only rye IPA I had brewed previously was Denny’s famous recipe. I didn’t really care for the combination of rye, Mt. Hood and Columbus hops in either my batch or the one my friend Scott brewed.

This Red Rye IPA is a continuation of our attempt to brew hoppy beers with a wide variety of characters. Citrus (Hoppy Wheat), Dank (Amber IPA), Classic “West Coast” (Pale Ale), and now spicy-grapefruit. I opted for the combination of Sterling and Cascade in a roughly equal ratio as both are assertive, but not nearly as much as some of the bold new varieties coming onto the market. The Cascade was a sample that Jacob obtained from Indie Hops. They have hyped their lower temperature pelletization, but these are whole hops. Sometimes their hops are available to homebrewers through Falling Sky Brewing.


While brewers often call rye “spicy” I’ve always sensed more of a toasty/earthy flavor. As step-mashes, to alleviate the sticky character of this grain, may prove challenging on the commercial system, I skipped the beta-glucan rest and kept the rye malt to under 20%. In addition I added both Fawcett Caramel Rye and Weyermann Chocolate Rye for additional dimension to the rye flavor. Along with the American pale base, I added melanoidin to enhance the malty character, and CaraRed to ensure a deep saturated red color. CaraRed didn't taste like a true caramel malt, my guess is that it is similar to Weyermann CaraAmber (which despite the name is toasted, and not a caramel/crystal malt). Depending on where CaraRed falls, this recipe may have a bit more caramel/crystal malt than I usually add to hoppy beers, but I had great results with last year’s India Red Ale which was brewed with 12% crystal malt. 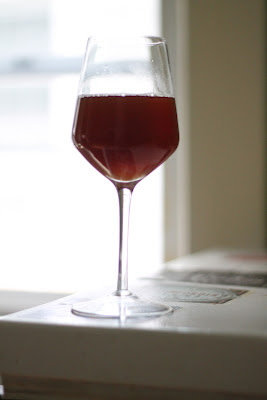 After a few batches using my new chilling rig (March pump, to HopRocket, to Therminator) I have to say it was a breeze going back to my old immersion chiller and ice-water-recirculating pump for this brew. It takes a bit longer to chill, but using ice in this way is much more efficient than in a pre-chiller because the ice water keeps running through the chiller until it absorbs as much heat as it can.

This is the last hoppy beer I’ll be brewing for a few batches because I recently had two 5-gallon barrels arrive from Balcones Distillery that need to be filled, and then refilled relatively quickly. I also brewed my sixth batch of lambic last weekend, fermenting with a starter I made from six bottles of 3 Fonteinen gueuze (including all four of the phenomenal Armand’4 series), and you probably thought I’d forgotten the sorts of things this blog is known for?

Undiluted filtered DC water. This is a darker hoppy beer, so I didn't mind the high carbonate as much as I usually do. 6 g of gypsum and 3 g of CaCl added to the boil.

Collected 6.75 gallons of 1.060 runnings with a fly sparge that I ended up batching at the end out of concern for channeling.

Added the final dose of hops and waited 15 minutes before starting the chill, hop-standing. Used ground water to get the wort down to 95F, then switched to recirculated ice water. When I reached 66F I strained the 1.070 wort and diluted with .5 gallon of spring water to hit my target gravity.

Wort color looks darker than the expected ruby red, may look a bit lighter after fermentation.

Pitched 12 oz of loose yeast slurry from the Hoppy Wheat #2 harvested two weeks earlier (stored in the fridge, allowed to warm to 66F before pitching). Shook to aerate. Left at 66 F to start fermenting. Good activity by the following morning.

8/18/12 Racked into a flushed keg containing the sack of dry hops. Left at cellar temperature until a tap opens up. The color appears substantially lighter than the wort did, maybe even too light.

9/26/12 Tasting notes for this one. Really solid beer, I like the hop character, I just want it bolder. I like the maltiness, I'd just prefer it a bit drier.
The Mad Fermentationist (Mike) at 9:26 AM