When a recipe calls for a dry hop, what do you do? Add the hops to primary as fermentation slows (as Firestone Walker does)? Cold crash the yeast out of suspension before dry hopping at cellar temperature (like Russian River)? Add the hops to the serving vessel and let them sit in there until the beer is gone (as I do)? There are so many combinations of time and temperature, with each imparting their own unique character.

For this second batch of Hoppy American Wheat, I wanted to soften the impression of bitterness. While dry hopping does not add IBUs (heat is required to isomerize alpha acids), extended time on hops can add to the perceived level of bitterness. This can work well in a strong hoppy beer, but isn’t what I was looking for in this refreshingly citrusy beer. The result is a better balance than the first batch, more drinkable, with a brighter hop contribution.

This recipe is just about dialed in, not much left to change as far as I am concerned (good thing too as I'm out of Citra hops until the fall harvest). 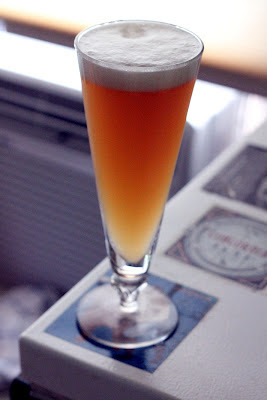 Smell – Fresh orange zest, and classic Amarillo fruitiness. It doesn’t have a hop aroma that leaps out of the glass and across the room like some of my other hoppy beers, but I like the lack of green “stemmy” hop aroma compared to extended keg hopping. This one should kick quickly enough that I won't miss the longevity of the hop aroma that keg hops provide.

Taste – The hops come through well in the mouth, saturated, but not aggressive. I think the hop-back really shines in a beer like this. The flavor has this wonderful lingering soft bready/doughy quality. The bitterness is really smooth, but still much more than you’d expect in a “standard” American wheat. Not much sweetness. Very clean fermentation, no noticeable off-flavors.

Mouthfeel – The body is surprisingly full and creamy for such a light beer. The first batch was slightly tannic, maybe from long contact with the hops. Carbonation adds a slight sparkle, especially in the finish, cleaning off the palate.

Drinkability & Notes – Close to my ideal summer session ale. This is the sort of beer that is dangerous on a hot summer day if you are thirsty. I could stand for a slightly stronger hop nose, but that was probably just because I didn’t weight the dry hop bag enough and a third of it floated above the surface of the beer.
The Mad Fermentationist (Mike) at 8:18 PM