With all of the attention that both 100% Brett fermentations and sour beers receive, I wanted to revisit bottle conditioning with Brett. This is what Orval does to produce what Michael Jackson referred to as the "quintessential beer" and was also responsible for the batch Russian River's Vinnie Cilurzo refers to as his best, the original bottling of Redemption (only time will tell if his collaboration with Sierra Nevada, Brux Domesticated, ages as gracefully).

Over the years I’ve done a number of split-batch experiments. It started six years ago with a hop experiment, and continued with three sugar experiments, and a flavored (Frangelico, raspberry jam, cocoa/vanilla, and bourbon/coffee) oatmeal stout that for some reason I never posted about. Those batches all involved either splitting the wort during the boil, fermentation, or aging, which requires multiple one gallon jugs.

Adding Brett at bottling is something I was long wary of. The two common species of Brettanomyces used in brewing (anomalous/claussenii and bruxellensis/lambicus) both produce an enzyme that allows them to ferment carbohydrates (dextrins) up to nine glucose molecules long (brewer's yeast can only ferment chains up to three glucose molecules long - maltotriose). With too much residual gravity remaining the Brett will over-carbonated the beer given time, which can result in gushing or even bottle bombs. However, several brewers I've interviewed for the book (like Gabe Fletcher of Anchorage Brewing) swear that fermentation under pressure in the bottle is the key to creating a great aromatic Brett profile.

The results of my first attempt at dosing Brett at bottling, last year’s Belgian Single, were good enough to earn second place out of 55 entries in the first round of the NHC (and a spot at the mini-BOS in the final round). Even after close to a year at cellar temperature, the bottles with Brett are still not over-carbonated. The base recipe for this batch was nearly identical except for a small addition of wheat in the mash, and a slightly adjusted hop-bill. I really like the subtle fruity character of WLP500/WY1214 (the Chimay strain) fermented cool as a background to the funky Brett. It is important to warm up the beer toward the end of fermentation to ensure a complete fermentation though. 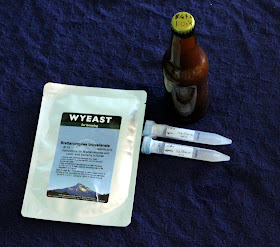 At bottling I split the batch five ways. 20% was capped without Brett, as a control. The remaining 80% was divided between White Labs Brett brux var. Trois (isolated from 3 Fonteinen), Wyeast Brett brux (most likely Orval), and two strains isolated from Cantillon by Jason Rodriguez of Brew Science. I added 10 drops of loose Brett slurry to each 12 oz bottle, and 20 to each bomber and 750. I used a dropper that I re-sanitized and then rinsed with sterile water between dosing each strain. It will be interesting to compare the flavors created by all these strains, but that won’t be for several months.

Odds are that all four of these Bretts are strains of the same species, Brettanomyces bruxellensis. However, just like California Ale and Abbey Ale are both Saccharomyces cerevisiae, Brett has a huge range of intraspecies variation. Hopefully in six months these five versions of the same beer will be a showcase for the range of characters Brett is capable of.

If you don’t follow Jason's blog, you should take a look. He has been doing some really interesting things, like isolating yeasts from a Brooklyn Brewery beers that was fermented with lees from a natural wine. The hunt is really just getting underway for the great strains of Brett at work in traditional wines and beers around the world. After the push towards single strain fermentations 100 years ago, microbiologist are once again becoming the most important people in the brewing world, but this time by bringing things back around to mixed fermentations. 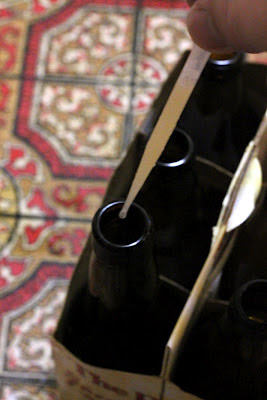 Batch sparged with 182 F water that included another 1/2 tsp of acid, stabilized at 170 F.

Chilled to 94 F, then switched to recirculating ice water to get it down to 66 F. Pitched starter, not decanted, pumped in 45 seconds of pure O2, left at 65 F ambient to start fermenting. Dropped to 62 F the next morning.

7/15/12 Up to 75 F, fermentation appears finished, but I want to make sure there are no simple fermentables left behind.

Put all of the beer into bottles, then dosed some with Brett:

Small bottles each got 10 drops of loose Brett culture, big bottles got 20 drops. Left at 75-80 F to bottle condition.