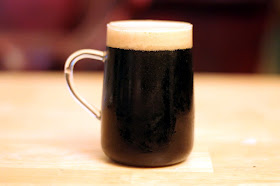 While coffee stout was only invented some 20 years ago (maybe at New Glarus?), but roasted barley had been used as cheap filler for expensive coffee for centuries. As in fruit beers, I think coffee works best as a subtle addition to enhance flavors and aromas already present in a beer. When I drink coffee, it tends to be black and potent, but I don’t care for dark French/Italian roasts. That was my goal for this recipe, lots of coffee, but no acrid/charcoal. Full coffee aromatics with more (hop) bitterness than you might expect when so many coffee stouts go in a sugary direction. The oats were added to provide the full body people expect in a stout, without the sweetness of crystal malts.

As with the second batch of Dank-Amber IPA, I prefer this batch of Coffee Stout to the first. The coffee is a bit more subdued, the mouthfeel is more rounded, and the oats make a larger contribution. The next step for this beer will be trying to get similar flavors after switching to American 2-row and 001/1056, which will make it easier to brew when we have a silo of base-malt and plenty of yeast to repitch. From there we’ll just have to find a local roaster to work with, and dial in exactly how much coffee character we want.

Appearance – Nearly opaque brunette with a dense tan head suspended above. With all of the oats it isn’t an especially clear beer, but in a dark beer who really cares? It doesn’t look out of place in a coffee cup.

Smell – Freshly roasted coffee, chocolate, and French toast? Maybe it is the toasted oats and crystal malt coming though, adding a nutty/bready aroma. Great balance, the coffee is present, but doesn’t overwhelm the flavors of the base stout.

Taste – The coffee flavor comes through well, round and fresh. It is the primary flavor, but it mingles with the mocha character from the roasted barley and chocolate malt. Otherwise very clean, dropping the small late-boil addition was the right choice. Firm bitterness, but as with all of these HopShot beers it is not as sharp as the IBUs suggest.

Mouthfeel – Creamy body, low carbonation. Could be a bit fuller to meet the expectations of an oatmeal stout, but it is close lacking the tannic character of the first batch.

Drinkability & Notes – Even on a warm summer night this is easy to drink in quantity. The Country Choice toasted oats are not as potent as home-toasted oats would have been, but in this case I think it works well. There isn't much I'd change on this one, hopefully I can get similar results without the Maris Otter and English yeast.
The Mad Fermentationist (Mike) at 7:19 PM