Down to my last couple bottles of this one gallon experiment that was aged on white nectarines. It was a portion of a larger batch, the second in our group red wine barrel project, that was based on Russian River's first batch of Beatification. That is to say a pale, sharply acidic, but not aggressively funky beer. 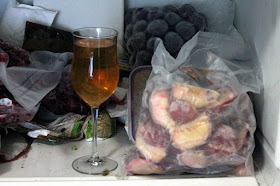 While I've had good luck with white peaches, white nectarines may be my new favorite fruit in a pale sour beer. More complementary than bolder fruits like cherry and raspberry. I've enjoyed the results of this test batch so much that last weekend I bought five pounds of white nectarines at the local farmers' market that I have since pitted and frozen. I’m not sure exactly what beer they will eventually be added to, but I’m sure I’ll find something that makes sense.

Appearance – Blurry yellow-gold body. The thin, tight, white head dissipates completely almost instantly upon pouring. Unlike a few of my other batches recently, this is not much of a looker.

Smell – The nose is a mingling of juicy-fresh nectarines, vanilla laden oak, and mild earthy Brett funk. All of the elements that I look for in a sour beer are present. It gives a good impression of the sourness to follow. As it approaches room temperature I get just a hint of ethyl acetate (nail polish remover); it isn’t offensive, but I’d also prefer it wasn’t there.

Taste – Electric sourness on the tip of the tongue that explodes in the finish with a hint of vinegar. After the first sip the acidity begins to slowly fade. Wonderful fleshy fruit flavor, it is amazing to think that it is contributed by fruit harvested a year ago. The nectarines evolve through each sip, reminding me of taking a bite of fresh fruit. The funk and oak from the nose is less apparent in the flavor than it was in the nose, but they still help to cut through the fruit.

Mouthfeel – Relatively soft carbonation, despite adding wine yeast at bottling this one took quite a while to show any sign of refermentation. The body is thin, but not harsh/tannic.


Drinkability & Notes – I had a friend tell me he thought this batch was on-par with Lost Abbey’s near-mythical Yellow Bus (a pale sour aged on white peaches). I never had the chance to sample it, nor will I unless they make another batch, but given its reputation, quite the compliment. My friend Dyan had the opportunity to drink one of the few remaining bottles of Yellow Bus at a tasting here in DC a few weeks ago when Tomme showed up unexpectedly.
The Mad Fermentationist (Mike) at 8:27 PM