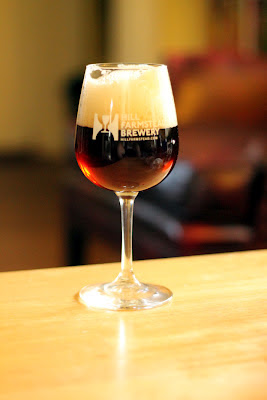 To refresh your memory, I brewed this Pomegranate-Cardamom Quad six months ago with my neighbor Dan. About two months later all but a six-pack of the 10 gallon batch was consumed at an Easter vigil celebration. Bottling some of the beer from one of the kegs using a Beer Gun was suboptimal compared to either bottle conditioning or drinking on tap, but I didn’t have another option to give my share the age it deserved. We added twice as much pomegranate molasses to half of the batch (10 ounces in five gallons), and that is the one I decided to take my share from.

Modern Times bought me the Beer Gun to facilitate shipping samples of test batches (I dropped off a box of Coffee Stout and Dank IPA earlier tonight). It is relatively simple to operate. A button floods the bottle with carbon-dioxide from the tank, and the trigger fills the bottle with beer. Beer is not dispensed into a pressurized bottle, like a counter-pressure system, but the long narrow beer-line minimizes foaming (as do cold, wet bottles). After more than four months in the bottle I’m thinking of this tasting as a gauge to measure how much oxygen the system allows into the beer.

Appearance – At cellar temperature the beer gushes a bit, surprising given that this was force-carbonated in a keg and bottled with my Beer Gun. Although not so surprising because it was fermented relatively cool and kegged sooner than I normally would have (in light of our Easter deadline). The airy head sinks relatively quickly into the deep-garnet body.

Smell – The nose is a complex combination of dark red fruits (I wouldn’t say pomegranate if I didn’t know it was in there). The spice comes in at a level where it is hard to tell what is yeast-derived and what is from the cardamom. Some malt toastiness, and slight alcohol heat. As it warms I get a subtle clay-like aromatic, odd but not off-putting.

Taste – Dry, fruity, yeasty, and potent. The pomegranate adds a subtle tartness that helps to balance a big beer that lacks much (if any) hop bitterness. Dried cherry, and plums, not as dark (raisin/fig) as many quads. The alcohol isn’t hot, but it warms the finish.No sign of Brett or anything like that, so I assume the excess carbonation was a result of the primary yeast.

Mouthfeel – Firm carbonation, but not as much as I expected given the way it poured. Medium-light body, nice to have a beer that is dry but not thin.

Drinkability & Notes – For a big beer this is an easy drinker. The balance, especially the tartness, helps to make it easy to drink. I like it as is, but some dark candi syrup would give it some of the flavors it is missing from a style-standpoint.This would be a great candidate for aging in a port barrel...
The Mad Fermentationist (Mike) at 8:24 PM